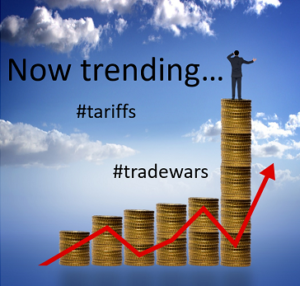 Ever since Trump announced tariffs on Aluminum and Steel in March 2018, Tariffs and Trade Wars have been “trending”. I get daily Google Alerts for articles on the Trade War between China and the U.S. and every industry has given their opinion on who the tariffs will really hurt/benefit. TV news broadcasts have talked about the tariffs on aluminum so often that my brother bought 10 cases of Coke because they were on sale and would soon be more expensive due to the tariffs.

Tariffs have existed since the founding of our country and have been called “protection policies” to ensure that the American worker/economy is protected.  Tariffs were the greatest source of federal income until the Federal Income tax began in 1913 after which tariffs no longer seemed effective in protecting our economy. After WW2, the U.S. promoted the General Agreement on Tariffs and Trade (GATT) established in 1947, to minimize tariffs and other restrictions, and to liberalize trade among all capitalist countries.  The U.S. became part of the Global economy and over time other countries took the lead in some industries which then inspired us to innovate more to regain the lead. Competition has always been a motivator for innovation and growth. Unfortunately, it also led us to want to make competitive things faster and cheaper which led to the migration to offshore manufacturing.

Trump hopes the tariffs will reinvigorate the U.S. economy and motivate U.S. manufacturers to reshore. At the Reshoring Institute, we are in favor of manufacturers returning to the U.S. but we know that tariffs are not the only pathway. We recently worked with a company that wanted to avoid the costs of tariffs by opening a new assembly facility in the U.S. We helped them with site selection and part sourcing. We used their current bill of materials (BOM) to determine the cost difference between Chinese parts and U.S. sourced parts.

The results of the project were eye-opening. Sourcing some parts in the U.S. were cringe worthy even before I got the pricing (details in following blogs). Some parts were not even within the range of the China parts and others weren’t available in the U.S. Over the next several weeks I will be blogging about my experience sourcing U.S. made parts.  I was able to find some parts for the same cost or cheaper than parts imported from China and I have asked those manufacturers to contribute to the blog as well.

My hope for this blog series is to help you on your journey to bring manufacturing back to the U.S. but of course, you can always contact us for assistance. We help with site location, parts sourcing, tariff strategies and more!

Do you have systems and measurements in place to monitor your manufacturing cost components? Costs…

3D Printing – it’s been in the news lately, the mayor of San Francisco recently…