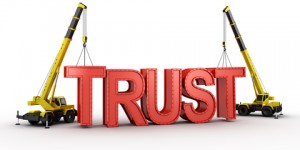 Public opinion is a fickle thing. One minute we love a company for exciting new products and then the next we hear that they are using child labor to make their products and we boycott them. How do you recover from losing favor?  How do you build trust with your customers again?

Searching the internet we can find many examples of companies that have gained and lost public opinion in a very short amount of time but then made tremendous efforts to gain back the public’s trust.  One example is Apple, who in 2012, had a whole year of bad press first due to labor conditions at Foxconn, and then they dropped voluntary environmental certification because their products didn’t pass.  Cities and universities were threatening to drop Apple from their preferred stock-buying lists which could have cost the company millions. To rebuild their brand and trust Apple made changes at Foxconn to ensure better labor conditions and they reversed their environmental certification decision.  Although Apple responded promptly, their reputation was still fragile.  Could the December 2012 announcement that they were going to bring manufacturing back to the US be another step in restoring that trust even more? How many other companies could benefit from restoring the public’s trust through Reshoring?

Walmart is another example of a company that has seen its share of bad press but has become a global leader in committing to US Manufacturing and Sustainability as part of their Global Responsibility. In January 2013, Walmart announced it will buy an additional $50 billion in U.S. products in 10 years in an effort to grow U.S. manufacturing and encourage the creation of U.S. jobs. Building the public trust and respect? Sure.

One of the factors when considering Reshoring is public sentiment. Although unemployment is the lowest it’s been in five years and more manufacturing jobs have been added, we are still in tough economic times..  In President Obama’s State of the Union address he asked us to make this year – A Year of Action. Bringing part of your manufacturing back to the US will not only restore the American public’s trust and respect in your company and brand, it will also give us hope in a bright economic future.

Rising Cost of Doing Business in China by Sean Rothrock