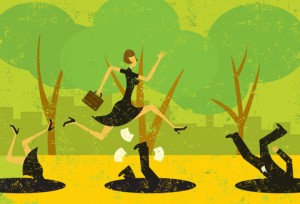 Have you ever tried to do too much at one time? Of course you have, we all have. In most cases it works out with very little fallout.  In some cases though, time and money can be lost.

Years ago the alternator in my Saturn died and I decided to fix it. How hard could it be? I am an engineer, I know mechanical things and the alternator in this case was in an easy to get to location.  So I buy and replace the alternator. A couple of days later my car dies. I exchange the alternator and start over. A few more days later it dies again. This time I decide to call in an expert.  The mechanic told me as nicely as he could manage that although I did replace the alternators correctly, I didn’t take the timing belt into consideration. Of course this was hundreds of dollars and many wasted hours later. I did something similar in trying to replace my faucets. That experience was even more expensive. What those two examples taught me was that sometimes it’s more cost efficient to call in the experts!

For the last couple of years there has been a lot  of positive news coverage about Reshoring and the benefits of bringing manufacturing back to the U.S. Companies such as Starbucks, Apple and Caterpillar have successfully Reshored some of their products and received  praise from shareholders and from the public. But the news isn’t always positive.

Take Otis Elevator for example. “I think we failed on both the planning and the execution side,” Robert McDonough, chief executive officer of the United Technologies unit that includes Otis Elevator, told analysts in March, according to the Wall Street Journal. Otis did consider advanced manufacturing and localization but they failed to consider other areas such as the labor force and supply chain systems. They tried to do too much and they didn’t have the expertise to do it on time and on budget.

We take a different approach to helping our clients evaluate Reshoring.  We evaluate and score a company on 10 dimensions including Innovation, Automation, and Localization.  Before we recommend that you proceed with your Reshoring effort, we identify your strengths and weaknesses and provide a road map for the way forward.

Failure is hard.  Hard to admit, hard to accept and hard to reflect on.. Last…

The Reshoring Team at The Assembly Show