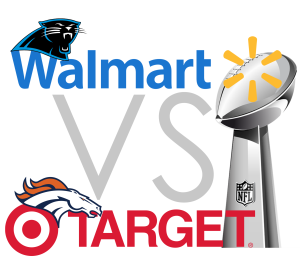 As the two best teams in the NFL get ready to square off in the biggest game of the year, grocery stores stock up for food, drinks and party favors. “According to ICSC’s latest consumer survey more than 190 million people plan to watch and will spend an average of $89 on food, drink, apparel, and merchandise totaling over $17 billion”1. Before we get into Super Bowl favorites, let us focus on the real winners: Walmart and Target. Although these stores will be winners due to the gargantuan amount of weekly sales, these two stores are also winners for their efforts with locally sourced products that support a stronger middle class America.

The Carolina Panthers conducted a fast, undefeated start to the 2015 season. Similarly, Walmart had a jump start to the “US Manufacturing” initiative in 2013 with a pledge to spend $250 billion on American made products by 2023. Walmart plans on strategically spending this by increasing the amount of American goods they already purchase, sourcing newer goods, and Reshoring the manufacturing of goods they currently buy.2 A perfect example of facilitating efforts can be seen in Walmart helping Impuls Footwear buy its gel soles from the United States rather than China, and bringing 40 jobs to Wadsworth, Ohio in the process3.

The opposing Denver Broncos also had a strong start with 7 straight wins then quickly suffered back-to-back losses against the Colts and the Chiefs. As Super Bowl hopes faltered for the Broncos, so did Target’s hope to support local companies. However in 2015, Target finally introduced its impeccably crafted, locally sourced Target Collective line on March 15, 2015. This line includes hand-tooled leather belts, durable canvas bags, graphic tees and irreverent stationary from partners Billykirk, Owen & Fred, Taylor Stitch, Duluth Pack, Locally Grown, and Terrapin Stationers. 4 This new collective brand gave Target the jump-start they needed like Manning did for the Broncos when he replaced Osweiler in their final regular season game against the Chargers.

Akin to the Panthers demolishing the Cardinals in the AFC Championship game, Walmart asserted its dominance and proved that its bold “Made in America” claims were not just lip-service. Walmart hosted the 2015 US Manufacturing Summit and Open Call Event where companies were given the chance to pitch their American made products to be sold in Walmart Stores. A testimony to that effort is the numerous American companies Walmart conducts business with and or is facilitating a manufacturing effort.  Surely the 2016 Summit will yield more American Business.

Target’s line of clothing and minimal partnerships is simply dwarfed by Walmart’s massive investments in American jobs. Nonetheless, Target is still in the game, but if I had to choose who is going to win the big showdown I would pick Walmart and their metaphorical football symbol, the Carolina Panthers. 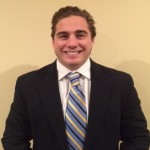 Nick Privitelli is pursuing a Bachelor of Finance and a minor in Supply Chain Management at the University of San Diego.

Growing up the 3R’s were Reading, Writing and Arithmetic.  When looking for an image for…

How to Avoid the Pitfalls of Reshoring

Have you ever tried to do too much at one time? Of course you have,…