In the hit Netflix series, Stranger Things, the main characters find themselves questioning what is happening in their reality. This show takes place in fictional Hawkins, Indiana. It seems to be the most ordinary of places until a young boy goes missing. While his friends, family, and the town sheriff begin their search for him, a young girl with psychokinetic abilities called Eleven escapes the nearby U.S. Department of Energy. Together they uncover an alternate dimension which they call “the Upside Down” that reflects a version of their reality and ultimately changing their day to day life. This science fiction storyline is not so far off from today’s world.

Though we are not fighting off monsters in alternate universes, there is another dimension taking over the way manufacturing is done. The Internet of Things (IoT) is the ability of everyday objects to connect to the internet and exchange data. The IoT reflects day to day activities with such detail and insight that it creates an alternate dimension. If we can use our powers (the IoT) just like the young heroine Eleven, we will ultimately save the day (make better business decisions in manufacturing).

The IoT takes many forms within manufacturing and has a wide range of abilities. These include the use of sensors, barcodes, and real-time locating systems (RTLS) and function in the areas of transportation, warehousing, tracking, and production monitoring. One of the greatest benefits of IoT in manufacturing is having visibility of the production process all the way to the customer. With this information businesses now have the ability to make adjustments more diligently and take preventative measures.

In the future, we can expect businesses to find new and creative ways to use IoT. Experts believe that pre-installed IoT manufacturing devices will grow to 923 million in 2020, and manufacturers will spend about $267 billion on it (Greenough). The Internet of Things has taken the industry to another dimension and should no longer be called a stranger thing. 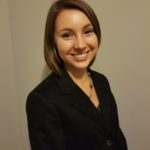 is a Student Researcher for the Reshoring Institute. She is currently a senior at Saint Louis University pursuing a degree in Business Administration with a concentration in Marketing and a supporting area in Information Technology Management. In addition to her studies, she is employed at the Center for Supply Chain Management where her main responsibilities include creating promotional items, designing graphics, as well as research.

During her time at Saint Louis University, Kalli embraced many opportunities. In the Spring of 2016, she studied abroad in Madrid, Spain where she was immersed in the culture and traveled to many destinations across Europe. She is an active member of the Service Leadership Program where she gains valuable leadership skills. In her free time, she enjoys going on outings with her Little from Big Brothers Big Sisters, drawing, and reading.

Before considering how to rebalance your global supply chain, first you should take a look…

Once again, Walmart held its summer Open Call U.S. Manufacturing event at its headquarters in…