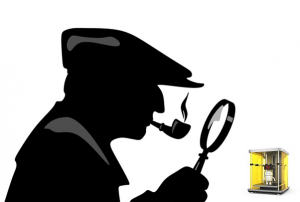 3D Printing – it’s been in the news lately, the mayor of San Francisco recently took a class on it and there was an episode of Elementary staged around it.  So what is it really?

Although it’s been called the “latest technology” for manufacturing it’s actually been around for years. I learned one form called CNC, Computer Numerical Control, in high school. Using algebra and a hand drawn 2D design on grid paper, I programmed the machine and created a 3D object – a rather lethal looking Christmas tree (the point on the top was very sharp).  CNC works by placing the material on a table that moves in the X and Y position while a spindle moves in the Z direction to cut the material according to the program. CNC is still being used in manufacturing (the research center I worked at in Mexico had several) but the equipment is expensive and oftentimes inaccurate.  They’re also big and bulky and create a lot of waste.

3D Printing is actually the opposite of CNC – instead of taking material away by cutting, it adds material to create the object which is why it’s called additive processing. How it “adds” material is actually determined by the material.  Some materials such as plastics (polymers) and metals can be melted and then dripped (granular) or extruded. Other materials such as paper can be laminated.

So what is 3D printing used for and how does it help with reshoring?  Like all technology, over time it’s gotten cheaper and smaller.  A design engineer can now produce prototypes at his desk instead of sending them to out to be built.  This enables changes to be made quickly and efficiently.  Unique parts can now be mass produced on the shop floor instead of being off shored, which saves both time and money.  There is also the “cool” factor, several schools around the nation have incorporated this into their Math and Science programs, which is getting kids interested in technology!

Failure is hard.  Hard to admit, hard to accept and hard to reflect on.. Last…