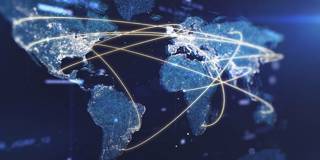 Globalization survived Brexit and Donald Trump, and it appeared to be thriving even after the COVID-19 pandemic. But with Russia’s invasion of Ukraine, the economic “mutual assured destruction” that was supposed to deter decoupling apparently reached its limits. NEW HAVEN – After decades of unprecedented openness, international economic relations have entered a new era, characterized by mistrust and division. Given the potential costs of this shift, it is worth retracing how we got here. Is the Pound Close to the Breaking Point? guoya/Getty Images Following the end of the Cold War, globalization brought about a drastic reduction in extreme poverty, not least by enabling East Asian countries, including China, to achieve rapid growth and development. Living standards (as measured by income per capita ) also improved globally. Open trade and market-oriented policies were central to this progress. Trade with low-wage (at the time) countries – such as China, Mexico, South Korea, and Vietnam – kept goods prices and wages in advanced economies in check, benefiting both consumers in these countries and workers in the exporting economies. Economic interconnectedness arguably also contributed significantly to the long period of peace enjoyed by the Western world. In the era of so-called hyper-globalization, war meant disruption of far-flung supply chains, with severe economic consequences. In such a system, everyone has an incentive to behave. The transition from interconnectedness to fragmentation has occurred in three distinct phases, each with its own causes and implications for the future of globalization. The first phase began in 2016, with the ascendance of inward-looking politics in two former bastions of globalization. With Brexit, the United Kingdom rejected integration with Europe. And by electing Donald Trump as president, the United States embraced an “America first” ethos that opened the way for a trade war with China. These developments were reactions, first and foremost, to rising inequality. While the average person globally was better off at the end of the 2010s than in 1980, many developed-country workers increasingly felt left behind. Forsaken Futures PS Events: Forsaken Futures Don’t miss what David Miliband , Laura Chinchilla , Bill McKibben , Mohamed Nasheed , and more had to say at our latest virtual event, Forsaken Futures . It was not just a feeling. Communities that were more exposed to import competition from low-wage countries – a result of pre-existing spatial industrialization patterns – did worse than communities that were sheltered from imports (compare, for example, Hickory, North Carolina , a traditional factory town, and California’s Silicon Valley ). But it was also nothing new. Trade has long been known to improve general welfare, while also generating distributional tensions. The policy response most economists recommended is nothing new, either: rather than embrace protectionism, countries should pursue some form of redistribution. At any rate, there was little reason to believe that the backlash that began in 2016 would spell doom for globalization. The world was too interconnected to revert to the old regime. Then came phase two: the COVID-19 pandemic. A pandemic is one of the greatest risks globalization raises. The more interconnected countries are, the easier it is for disease to spread among them. At the same time, it can spur an every-country-for-itself mentality, exemplified by the export restrictions and other inward-looking policies that governments implemented in response to the crisis. Shortages of essential goods like personal protective equipment and supply bottlenecks provided more fuel for the argument that global supply chains could not be trusted. Many concluded that the “ dependencies ” created by international trade were sources of vulnerability. Building “resilience” through shorter, more localized supply chains became the order of the day. Yet the global trading system proved remarkably robust during the past two years. According to the International Monetary Fund, global trade, as measured by the ratio of merchandise imports to world GDP, has increased since 2019. Most shortages proved to be short-lived. Several other supply-chain bottlenecks – such as the recent baby-formula shortage in the US – had domestic, not global, causes. In fact, bottlenecks would probably have been much worse without international trade. So, despite an unprecedented public-health shock, the global economy kept going – wounded and at a much slower pace than before, but still with good prospects eventually to recover. Then Russia invaded Ukraine, and phase three began. The smooth functioning of global supply chains requires peace, stability, and predictability. The war has eroded trust among countries and shifted expectations about geopolitical alliances, spurring calls for “reshoring” or “ friend-shoring ” in the name of […]

A lot has been said, and indeed is being said, about India’s showcase of its…

Explained: What is friendshoring and will it stop the disruption of supply chains during geopolitical crisis?