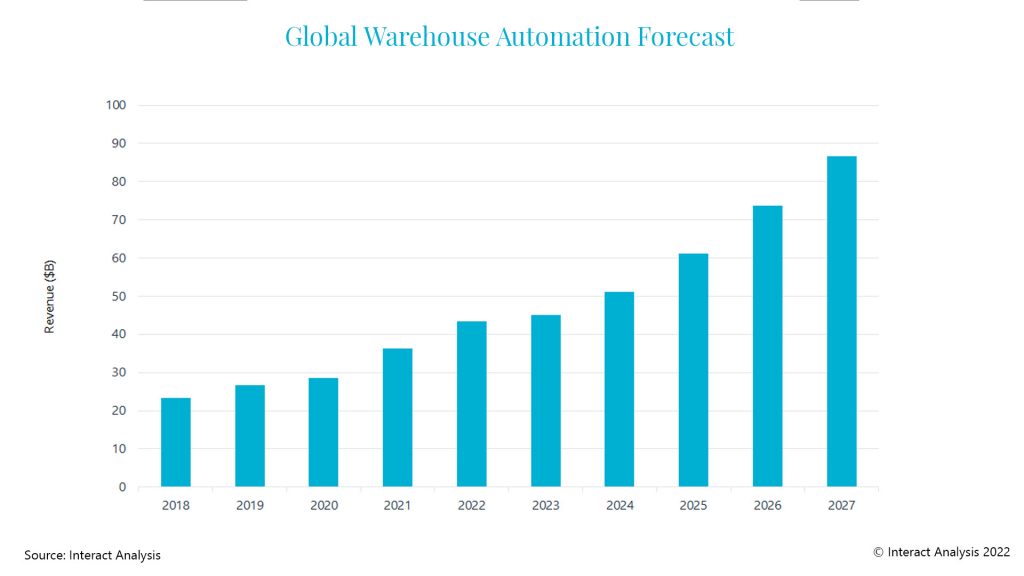 Interact Analysis expects a slower pace of automation growth in 2023, due to issues faced in 2022. Warehouse automation market growth expected to cool in 2023 Dematic recognized as a top employer KPI opens full-scale demo site for new four-way shuttle from Geek+ Research from Softeon finds companies dissatisfied with current levels of DC automation ABB survey finds risk from global “education gap” in automation More warehouse automation News The warehouse automation market has been on a tear the last couple of years, driven by major spending by Amazon and other companies with ecommerce fulfillment operations. With the ecommerce surge that occurred during the early months of the pandemic, companies with fulfillment operations looked to expand their DC networks and the automation used within them, fueling record growth for providers of warehouse automation systems. The magnitude of this recent growth is detailed in a new study from research firm Interact Analysis , which found the market grew by 28% in 2021, with revenues reaching $36 billion, up from $28.5 billion in 2020. Interact attributes the high growth in 2021 to companies readying for continued hyper growth in ecommerce, but now that pandemic conditions have eased and consumers have returned to stores, ecommerce growth has moderated, with some major buyers of automation including Amazon, responding by scaling back on DC expansion plans. As a result, Interact Analysis foresees a slowing pace of automation market growth in 2023 compared to 2021 and 2022, but then a return to stronger growth through 2027. According to the firm’s Warehouse Automation – 2022 report , between 2024 and 2027, the market is forecast to grow at a 19% compound annual growth rate (CAGR), driven by improving macro-economic conditions, as well as steady growth in ecommerce. “Certainly, the long-term outlook for warehouse automation is strong, but there are some challenges in the short to mid-term,” says Rueben Scriven, research manager for Interact Analysis. One big challenge is that some of the major warehouse automation providers do a lot of business with Amazon, and in the fall of 2022, Amazon decided it would slow-down the buildup of its fulfillment center network, as it became apparent the pandemic spike in ecommerce was moderating. Interact figures that about 35% of the total warehouse automation market in 2021 came from Amazon, so when Amazon decided to slow its investments in automation, that naturally dampens the market, though not immediately, given the timelines involved in deploying many types of automation systems. “The orders from the past couple of years are still materializing in [automation vendor} revenue in 2022,” says Scriven. “The reason for that particular growth pattern is because revenue typically lags order intake by a year or so, and it’s only recently that we’ve seen the slowdown in order intake.” The upshot for the market, Scriven says, is that revenue will still grow in 2023, but well off the high growth rate for 2021, largely tied to more modest ecommerce growth. Other factors are also involved, says Scriven, such as inflation, while the war in Ukraine is expected to reduce automation spending in Eastern Europe, which before the war, was forecast to be a fast-growing region for automation. “I see it as a bit of a contraction in that companies were slightly too bullish on ecommerce and have come to realize ecommerce sales would not remain as high as initially expected, and this is causing some re-equilibration in this market,” says Scriven. Over the long term, however, Interact believes ecommerce will continue to grow, while other trends like electric vehicle (EV) adoption and incentives for energy efficient technologies will increase the need for warehouse automation in EV and battery supply chains. In the U.S. market, the trend toward reshoring and near-shoring is also likely to increase the need for warehouse automation, says Scriven. These trends should help automation providers and systems integrators find more customers in durable goods sectors. For vendors, says Scriven, diversifying into sectors outside of ecommerce fulfillment should lead to steadier growth. Additionally, the ability to lead with software solutions that aren’t necessarily coupled with new automation hardware projects, but could be used to orchestrate existing systems or to help optimize manual warehouse processes, is another strategy for growth. “It is really going to be software that is the differentiator that allows integrators to win business,” Scriven says. Finally, ecommerce isn’t really shrinking, it’s just not expanding at the step-change pace experienced in the latter half of 2020, so over the long term, companies will continue […]