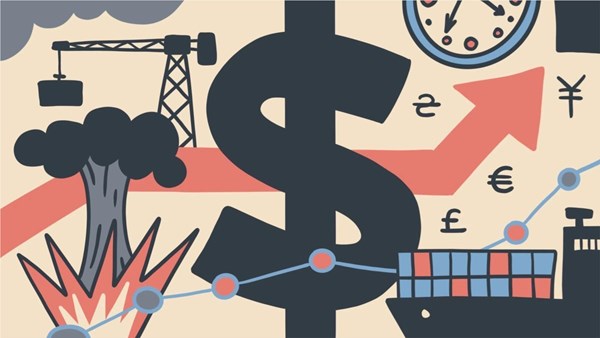 A strong dollar is exerting pressure on US-located manufacturing plants as a rising dollar diminishes their competitiveness against products manufactured in countries with weaker economies This has resulted in foreign producers exporting to the US to gain an advantage against the local manufacturing industry, which is being challenged in foreign markets as its goods become more expensive, as per a report published by WSJ . Infograph: Inflation hikes hit minorities the hardest in the US The increase in dollar value can be traced back to the nationwide shutdowns during the pandemic, as well as the stimulus checks that have been issued by the US government, and most recently the sharp rate hikes introduced by the Fed as the US economy battles four-decades-high inflation , which in turn resulted in international investors purchasing US dollars in order to buy Treasure Bonds. In a simpler explanation, parity between the dollar and the Euro will be focused on: If US kinder eggs are being sold to Europe for 1$, then the purchasing party in the EU would have to pay (theoretically) 1 euro. However, if the euro becomes weaker than the dollar, on the presumption that 0.5$ equals 1 euro, then European consumers would have to pay 2 euros for the same product. On the other hand, if we stick to the same hypothetical value, and Kinder eggs are to be sold to the US market, then 1$ has the power to purchase 2 Kinder eggs from the EU, becoming a challenging competition for products produced locally. Infograph: Americans are pessimistic more than ever when it comes to US economy The WSJ report adds, citing industry analysts, that the impact of a stronger dollar will likely result in a decline in revenues for manufacturers that will be revealed in their third quarterly reports later this month. Drew Greenblatt, president of Marlin Steel Wire Products LLC, a manufacturer of wire baskets for medical and industrial use, told the WSJ that during Covid, the sales volume of the company increased as US hospitals, that previously purchased their equipment from China, started buying their needs from Marlin Steel Wire Products. Unpredictable Supply chains and the sharp increase in shipping costs that impacted the globe since Covid have led to many American companies replacing their overseas suppliers with local producers. On the set of the increasing domestic demand, more production lines and new manufacturing plants have been established in the US, which in its turn resulted in reintroducing massive job counts that have been previously lost in favor of markets with cheaper labor . Greenblatt added that he bought another production facility from Indiana last year in order to increase production, and has also started producing lately mesh products for semiconductor US plants while introducing robotic welders and increasing 50% space at his main plant located in Baltimore. Greenblatt described the current disadvantage against European producers, as “like they’re having a 10% or 20% sale,” citing that it is due to their current pricing power that is overcoming their soaring energy costs and recession. Read more: Biden signs on $52.7 bln microchip investment bill to ‘counter China’ According to the report, Europe’s dwindling economies have impacted sales of US companies in EU markets. Whirlpool Corporation sales fell by 19% in Q2 year on year in Europe, Africa, and the Middle East, while 9% was a result of currency-exchange values. On the other hand, Agco Corporation, an American company specializing in making and selling farm equipment, witnessed a currency-related 8.5% drop in sales revenue in the EU and ME regions, which accounts for more than 50% of the company’s export markets, in the first half of 2022. However, according to the WSJ report, there are US companies that were at an advantage when it came to currency fluctuation. Local American plants that rely on components imported from foreign countries with weaker currencies to manufacture their final products have benefited from a strong dollar, which means strong purchasing power abroad. CEO of Generac Holdings Inc., Aaron Jagdfeld, told the WSJ , ” We view the strengthening dollar as helpful to offset higher logistics costs we’re paying,” as the company produces electricity generators using components from Japan, EU, and other countries. The CEO however stated that, due to tariffs imposed on Chinese products by the Trump administration and as shipping costs remain high, the full advantage of a high-value US dollar was not realized. US manufacturing advocates voiced their concern that a strong dollar will decrease the profits of […]

A trade war with China and the disruptive effects of the COVID-19 pandemic have U.S.…

3 Underreported Trends That Will Accelerate Reshoring

At Thomas, we’ve been tracking supply chain shifts since the Covid-19 pandemic began and our…