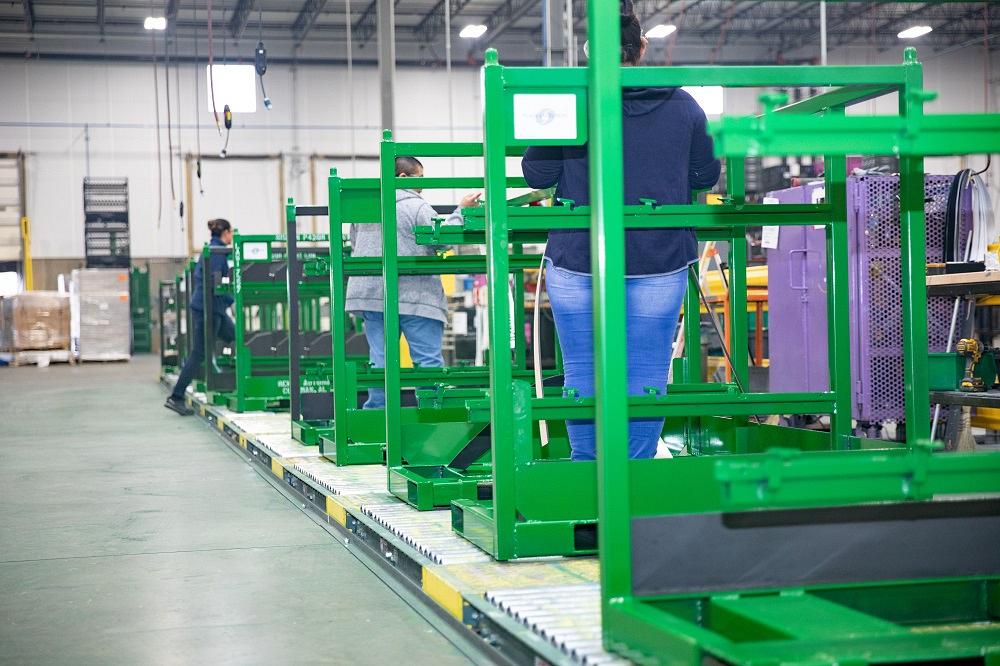 Logistics, material handling, and packaging company fabricates returnable steel racks, containers Workers assemble final pieces onto returnable racks for an automotive supplier. Most scientists quickly point out that although they call COVID-19 the novel coronavirus, pandemics aren’t novel at all. The global economy is quite novel, though, especially when it comes to the velocity and sophistication of global trade—a system built without a pandemic in mind. Reshoring initiatives are being pushed into high gear; supply chains are being reshaped, at least where practical. Market consolidation has added some inertia to the reshaping; if, say, a fabricator can get a certain hydraulic component only from a certain supplier, there’s not much that can be done about it, at least in the near term. But for sheet metal and plate parts, supply chains can indeed be altered. More OEMs are looking for domestic partners and, with that, new ways of transporting parts to their final assembly plants. Within a designated area in a Greenville, S.C., fabrication facility, a technician starts an ASTM shake test on something that has become central to that domestic supply chain: returnable, reusable packaging. These include steel racks, containers, and (if required) the rigid and fabric dunnage inside. How they’re designed and fabricated have broad implications about the domestic supply chain. The Science of Returnable Packaging “We’re modeling how a container fully packed with parts would perform on a U.S. highway,” said Kacie Freeberg, senior director, industrial, at ORBIS , describing why the technician is performing that shake test. Based in Wisconsin, ORBIS has various locations dedicated to manufacturing returnable packaging, including a metal fabrication plant in Greenville, which the company acquired when it purchased Response Packaging in 2018. ORBIS has deep roots in the packaging world. Its parent company, Menasha Corp., established itself in the material handling arena more than 150 years ago when its turned wood products were seen carrying materials in bakeries, laundries, hospitals, and factories. In the 1990s, the organization created its ORBIS subsidiary to focus on plastic and fabric returnable packaging products, and the purchase of Response Packaging brought ORBIS into the metal returnable market. Today, the company operates two metal fabrication facilities, one in Mexico (through joint venture) and one in Greenville. The plants fabricate the metal containers and racking and incorporate rigid or fabric dunnage. That shake test in the South Carolina plant occurs away from the band saws, the tube laser, and the welding booths that fabricate custom returnable racks and containers, mainly for the automotive supply chain. And it’s not just an afterthought. The ASTM test simulates where a streamlined supply chain literally hits the road, showing how a customized returnable packaging reacts to the bumping and jostling of road travel. “The test itself uses various frequencies and speeds,” Freeberg said. “It allows us to see if there’s any rubbing. If, say, a [rack or container] holds just one large part, it might not be so critical. But if you’re packing, say, a number of side body panels, one visual flaw on each part can reject an entire truckload of goods. We need to make sure these containers work as designed for the life of the program.” Highway travel is just one variable. Designers take stop-and-start city travel into account too and, especially, the jostling created when fork truck drivers and material handlers move parts off trucks and to final assembly. How they’re moved matters, as well as how parts are presented to the assembly line. The frequency of this loading and unloading also matter. Mike Costello, ORBIS’ product manager of metal solutions, described a common misconception about packaging and travel distances. “We’re seeing supply bases become more and more localized,” he said, adding that small, frequent deliveries can introduce a host of efficiencies for both suppliers and OEMs. “But there’s a misnomer out there that shorter travel distances means lighter packaging. In the world of returnables, a short travel distance means that the rack or tote will be used at a higher frequency. ORBIS’ final assembly operation in its Greenville, S.C., returnable packaging plant. “Early in my career [at another manufacturer], I recall we had to ship bumpers a short distance, and we thought about making the returnable packaging out of lighter, thinner steel,” Costello continued. “But those racks started breaking down sooner than they should have. When we dug into it, we found they were being moved 14 times a day.” Such frequent deliveries might represent the epitome of just-in-time manufacturing, with parts being “drip fed” […]

What This Golf Club Says about Reshoring Manufacturing

Like many metal parts, a golf club’s head typically starts as a casting or a…

How Biden And Trump Plan To Reshore Jobs

Hey, everyone. It's Cardiff. This is THE INDICATOR FROM PLANET MONEY. Today is, of course,…