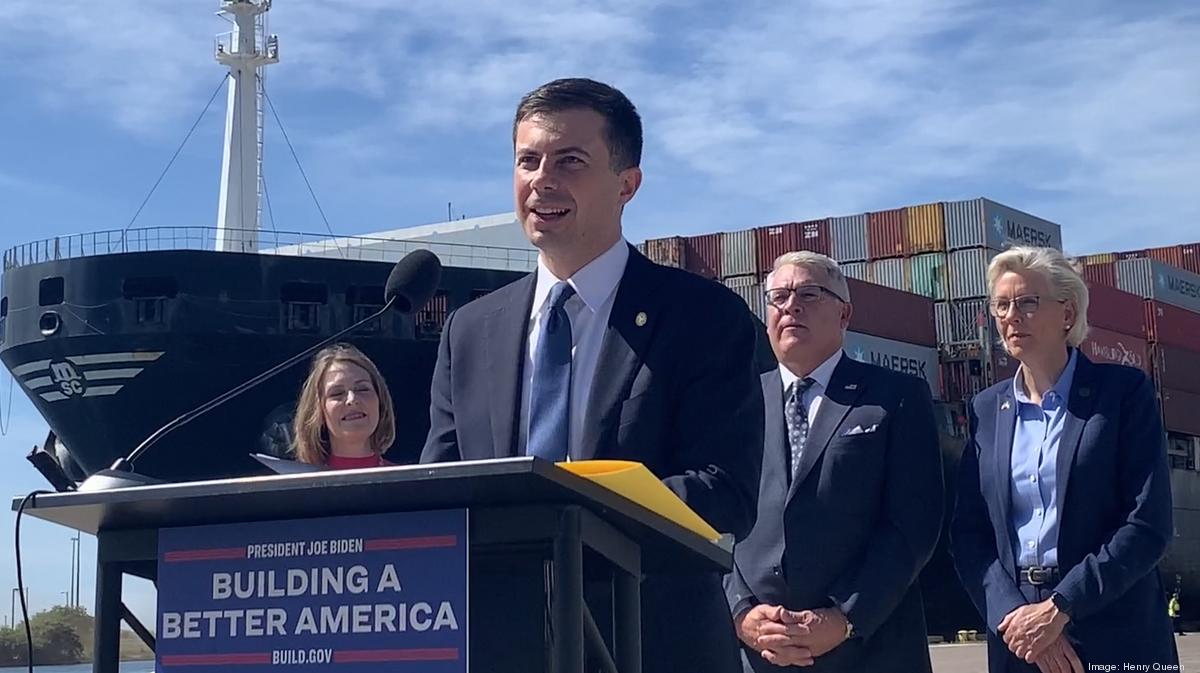 U.S. Secretary of Transportation Pete Buttigieg green-lit a $12.6 million federal grant to Port Tampa Bay earlier this month, and he made sure to stop by to promote it on Tuesday as his first stop on a four-day tour. He stood in the Tampa summer sun for over 20 minutes, listening to local leaders thank him, and the federal government for enabling the port to handle more cargo as people move here and consumer demand increases. “Thank you for the warm welcome,” Buttigieg said, “and I do mean warm.” The grant , funded by the recently expanded Rebuilding American Infrastructure with Sustainability and Equity program, will help the port build an approximately $17 million berth at Port Redwing in South Hillsborough County. Berth 301 will create 800 jobs and make room for a third large ship to operate at Port Redwing, according to the transportation secretary. It will also reduce the annual truck miles from the port by nearly 3 million, Port Tampa Bay CEO Paul Anderson said. That will help keep shipping costs down for carriers and reduce maintenance expenses on well-traveled corridors like Interstate 4, Buttigieg said. The former presidential candidate called Port Tampa Bay “crucial” for the economy. His visit comes as the federal government increases its role in trying to reduce harmful emissions through bills like the Inflation Reduction Act. As he spoke at Port Tampa Bay’s container terminal, operations continued as usual — a ship pulled in, workers whizzed around in trucks, and two Post-Panamax cranes began unloading containers. It’s all essential to keeping Florida’s economy — the 15th largest in the world — humming at an enviable pace; it also shows just how far away politicians and advocates are from seeing an economy that isn’t based on fossil fuels. Port Tampa Bay is Central Florida’s hub for gasoline, diesel, jet fuel, ethanol and lube oil, according to a recent board presentation. Anderson, who participated in a March panel that questioned the federal government’s heavy focus on the environment, said Tuesday that the port is looking to further reduce emissions, hopefully through more federal grants. Buttigieg nodded when longtime local truck driver Ken Williams said he hopes to see the secretary in Tampa again. This investment in Port Tampa Bay also comes as ports across the country continue to face backlogs — something not seen as often in Florida. Buttigieg called the RAISE grant part of a broader vision of reshoring manufacturing production and keeping American infrastructure up-to-date. “Part of the fight against inflation is making sure that our supply side of the economy keeps up,” Buttigieg said. “Remember, we have extraordinary demand right now. People are buying goods; they’re booking trips. We need to make sure that the [production] capacity can keep up,” Buttigieg said. “That’s exactly why we need to invest in our supply chain.” In the past 12 months, Port Tampa Bay handled over 1 million tons at Port Redwing, according to a news release. Tenants at the property include Mosaic Co., Logistec, SESCO, Precision Build Solutions and the recently relocated Ardent Mills. The port’s finance department expects its container business to increase 38% to 250,000 TEUs next fiscal year. The Interstate 4 corridor has the largest concentration of distribution centers in the state, with an additional 10 million square feet of capacity under development, according to port documents. Cargo — not “cryptocurrencies and all those things” — continues to be the currency of the world, Anderson said. Other speakers Tuesday included U.S. Rep. Kathy Castor , Tampa Mayor Jane Castor and U.S. Deputy Secretary of Transportation Polly Trottenberg . Mayor Castor said the RAISE grant is a big deal; investing in infrastructure is one of the foundations of our economic growth and quality of life, she said. Across the bay, Clearwater also expects to benefit from its own $20 million RAISE grant for a new transit center . “It’s easy to talk about all the issues and challenges,” Buttigieg said, referring to American infrastructure. “It’s harder to execute. That’s exactly what we’re doing.”

The New Normal in Manufacturing – A Digitized Future

We can learn a lot from history. In the face of a global pandemic that…