For decades, labor cost differences have been a primary influence in the continuous shift of manufacturing production from the U.S. to China. In 1980, the cost of labor in the U.S. was more than 30 times of that in China. As China became less agrarian and more of its population migrated to large cities to work in new factories, wages rose dramatically. By 2018, the U.S.-China wage gap had closed to only four times, rising approximately 200% in the U.S. but over 2,000% in China over nearly 40 years. Yet, despite the sharp rise in Chinese manufacturing wages over the last 20 years, offshoring continued. The U.S. manufacturing industry suffered, including millions of lost jobs, stagnant inflation-adjusted wages and a decline of the middle class.

Predictable wage increases in China do not tell the whole story of America’s declining status as a factory for the world. The establishment of special, quasi-free market Special Economic Zones, seemingly endless supply of relatively inexpensive labor, and fully globalized shipping networks allowed China to capitalize on the high cost of manufacturing in the U.S., but perhaps a more important development was the world’s relentless march toward automation and robotics.

The replacement of manual labor by machines and software may have had just as much influence on the decline of the American manufacturing industry as foreign labor costs, domestic labor unions and international trade policy. Whether attributable to man or machine, parts of the American manufacturing industry have struggled for decades to be competitive and relevant, leading the industry to focus the remaining competitive advantages on the manufacture of niche, value-add or raw material-dependent products.

Despite a steady increase in their workers’ productivity, most American manufacturers have not been able to automate or reduce logistics costs enough to remain competitive—and offshoring, primarily to Asia, became an unfortunate reality for corporations of all sizes. When any company established a manufacturing presence in China and built a global supply chain, pressure was applied to its remaining competitors in the U.S. to either innovate or follow suit. Among some of the first U.S. manufacturers to offshore en masse were labor-intensive sectors, such as furniture and textiles, followed by manufacturers with relatively low transportation costs, such as pharmaceuticals and semiconductors.

Approximately a decade ago, several institutions in the U.S. converged on a theory that significant changes in U.S. manufacturers’ cost-benefit analysis were occurring and could create a tipping point toward reshoring certain products. The average hourly wages for reliable, competent labor in China and the cost of transporting manufactured goods safely and efficiently to consumers had shifted to such an extent that American manufacturers could potentially reshore their operations to the U.S. or near-shore them to Latin America. Their tipping point theory, predicated on higher Chinese production wages and increasingly complex and expensive global transportation and logistics costs, asserted that over a dozen manufacturing sectors showed formulaic probability of reshoring.

Today, nearly 10 years after the tipping point theory was first publicized, the American manufacturing industry may be on the precipice of another large surge in activity. Through the Great Recession and recovery, American manufacturing was kept buoyant by high-margin, low-volume products. Factoring in  the current public health emergency and the current Administration’s response, the U.S. manufacturing sector could regain some of its prior job losses in impacted industries.

The U.S. manufacturing industry is at a unique and unprecedented crossroads. Of the dozen or so manufacturing sectors that previously showed potential for being reshored by rising labor costs and comparatively steep transportation and logistics costs, the tipping point has further shifted, and justification for domestic manufacturing appears stronger. As the world struggles to contain the coronavirus and understand its long-term implications on our social, medical, educational and economic systems, Duff & Phelps has created a new analysis of the prior tipping point theory and integrated several key strategic factors that carry more (or at least equal) weight in a post COVID-19 world.

The following six criteria and circumstantial factors show the highest probability of a given sector to reshore:

Level of Automation: sectors that have seen a major increase in labor productivity

Essential Business Designation: businesses, sectors or products officially designated as critical or essential by the U.S. Department of Homeland Security or other governmental authority

In our analysis of the six primary criteria and 28 sectors, a composite of the eight highest-scoring production categories emerged as the most probable candidates to reshore to the U.S. They share the characteristics of relatively low labor and high transportation costs and feature some of the most advanced robotics, automation and manufacturing techniques across all technology-enabled industries.  Their manufacturing processes are more compliant with and conducive to U.S. environmental regulations, labor laws, intellectual property protections and consumer safety standards. Their profit margins and global demand also tend to alleviate concerns associated with reshoring investment costs. Given the U.S. government’s renewed focus on homeland security and essential goods and services in the wake of COVID-19, the following industry sectors will have to reevaluate their manufacturing costs, supply chain reliability and risk of significant business interruption even while the pandemic is still ongoing: 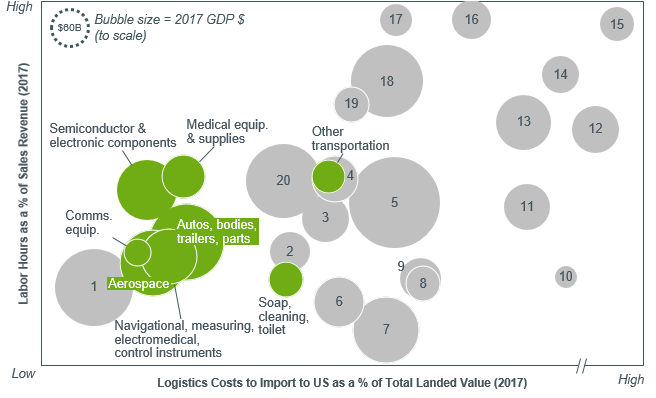 Today, cost isn’t the only significant factor influencing U.S. corporations’ manufacturing footprint. Based on the following factors, manufacturing in the U.S. may become economically feasible for more sectors and the U.S. may experience active and passive reshoring effects as companies consider these variables:

Regardless of COVID-19’s impact to the global economic structure, many large American manufacturing operations will likely remain anchored in China since production in the U.S. continues to be labor-intensive and/or global distribution is still so cost=efficient. However, our analysis suggests that additional factors beyond economic ones are being weighted more heavily and that many products historically made in China and destined for U.S. consumers or other markets around the world show high potential for being reshored.

Is This the Year for Digital Transformation of Industry?

Summary Is This the Year for Digital Transformation of Industry? Industry 4.0 and smart manufacturing…

(Re)shoring up technology and talent