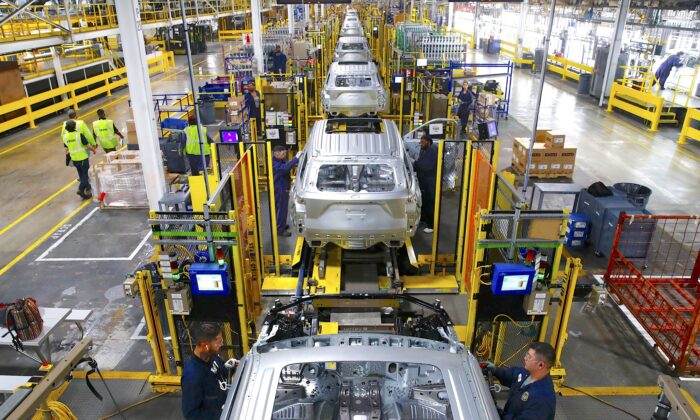 Workers assemble cars at the newly renovated Ford’s Assembly Plant in Chicago, Ill., on June 24, 2019. (Jim Young/AFP/Getty Images) Commentary In the 1970s, with America’s market opening to China engineered by those peerless (not) ethicists and strategists, Richard Nixon and Henry Kissinger, China became the “world’s factory” because many of America’s own factories moved there for the cheap and compliant workforce. Now folks are starting to realize—in part due to the pandemic, evidence of Uyghur forced labor in China, Russia’s weaponizing of gas exports, and Beijing’s threat of war against Taiwan, which could drag in the United States—that moving all our factories to China maybe wasn’t the world’s best idea from the 1970s. ( Roller disco , it is now clear, was definitely better.) While offshoring to China might have marginally increased profits for the largest corporations, it destroyed local American communities, industrial bases, and denuded many cities—from Detroit to Baltimore—of good jobs. Transport costs and emissions increased substantially, with the latter not accounted for in the final cost of production. With the loss of some of America’s finest industrial workers sometimes came the permanent loss of their factory-floor know-how. Overnight, it seems, America empowered the Chinese Communist Party (CCP), which can now use all of our lost industrial power against us, in a double-whammy, including by threatening to stop our imports of rare earths, pharmaceuticals, and computer chips. True to form, China’s ally, Russia, is now turning off Europe’s gas right before winter. A loader shifts soil containing rare earth minerals to be loaded for export at a port in Lianyungang, in China’s Jiangsu Province. China controls the world’s supply of rare earth minerals and the United States is seeking partnerships with allies to reduce its dependence on China. (STR/AFP via Getty Images) So Americans and friends are finally realizing—only from getting repeatedly sucker-punched—that relying for strategic goods on ourselves is preferable to relying on the enemies of democracy. Some of our politicians have long pretended, it seems, that these adversaries were friends. They apparently wanted to keep the money train ( Soul Train , from the 1970s, was far better) going for the biggest corporations. Reshoring Accelerates These same corporations, nudged by U.S. government tariffs and subsidies, are now starting to reverse course and move in the right direction of reshoring American manufacturing . There are variants of reshoring—known as friendshoring, onshoring, multishoring, and nearshoring—all of which are in the right direction as long as they offshore from China and its most powerful authoritarian ally, Russia. According to The Wall Street Journal , American companies are predicted to reshore 350,000 jobs this year, up from 265,000 reshored in 2021 and only 6,000 reshored in 2010. Reshoring was mentioned 12 times more often in the second quarter’s corporate earnings calls compared to the same period in 2019. (Just in case anyone is counting again: reshoring, reshoring, reshoring.) The job data comes from the Reshoring Initiative , a nonprofit that aims “to bring good, well-paying manufacturing jobs back to the United States by assisting companies to more accurately assess their total cost of offshoring, and shift collective thinking” from “offshoring is cheaper” to “local reduces the total cost of ownership.” To power the trend toward reshoring further requires several measures, according to the organization’s president, Harry Moser. “The reason for offshoring is that the U.S. manufacturing price is consistently too high—about 40 percent higher than China and Vietnam, and 10 percent higher than Europe,” he told The Epoch Times on Aug. 20. Moser added, “We need to become more price competitive by having a much larger and better-skilled workforce.” Workers work inside the clean room of U.S. semiconductor manufacturer SkyWater Technology Inc where computer chips are made in Bloomington, Minnesota, in April 2022. (SkyWater Technology/Handout via Reuters) Dollar Devaluation We should devalue the U.S. dollar and keep corporate taxes low, according to Moser, who believes the dollar is overvalued by 30 percent, which increases the prices we charge foreign importers for our products. U.S. capital investment, he said, should stay 100 percent deductible (as it is now) to incentivize more manufacturing and industry here at home. Jeff Perry , the chief economist at the Coalition for a Prosperous America, likewise argues in The Hill that the dollar should be devalued, boosting American exports and decreasing its debt through a “transaction fee on foreign purchases of financial assets.” The proposed fee, championed by Sens. Tammy Baldwin (D-Wis.) and Josh Hawley (R-Mo.), is called a “Market Access Charge” that would […]

Secrid CEO René van Geer: “Producing in your own country will become the most normal thing in the world in ten years’ time”

Reshoring is currently the ultimate trend. The Dutch brand Secrid, inventor of the Cardprotector, is an…

The Semiconductor Industry Association (SIA), which is composed of the world’s electronics giants, has remained…