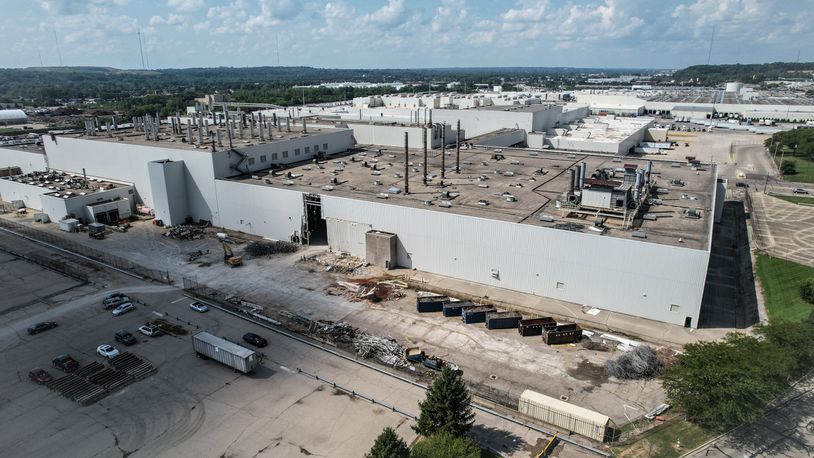 The last stage of rehabilitation efforts for the former General Motors Assembly plant in Moraine is expected to wrap up early next year, making it available for potential users. That’s according to Industrial Commercial Properties, which purchased the complex in 2010 with its partner Industrial Realty Group. “This is the last unoccupied building,” Dean Miller, the company’s senior vice president of leasing and acquisitions, told this news outlet. “We have redeveloped and filled approximately 2,300,000 square feet of this plant so far.” The final stage of rehabilitation is the last unoccupied building, a 392,000-square-foot facility located across West Stroop Road from the plant, a portion of which is owned by Fuyao Glass America. The structure, was constructed in the early and mid-1990s for the painting of vehicles as part of the former GM Moraine Assembly, Miller said. The revamped structure initially was scheduled to be available for occupancy by the end of 2021, but was delayed by “mostly difficulty with materials and labor associated with supply-chain slowdown,” he said. Its transformation is extensive. “We’re clearing out the building and removing the second floor,” Miller said. “We will then clean and paint the entire interior, install a new high-density sprinkler system, new LED lighting, 15 new docks doors and a new heating system, creating an attractive and tall white box. We will then have a 42-foot clear, heavy structure with wide column spacing and an unrivalled utility capacity, which we think will be very attractive to manufacturers.” Tenants are not yet committed to occupy the structure upon its completion, “but a few conversations are in progress,” he said. “We’re very encouraged by the anticipated wave of reshoring of manufacturing into the United States and think we’re in a good position to benefit,” Miller said. “Most developer-built buildings don’t have the utilities, heights, structure and other attributes needed to support manufacturing, but this one does.” The facility is hoped to be delivered market ready in the first quarter of 2023, he said, declining to disclose total cost for the restoration. Redevelopment of the former GM Moraine Assembly is critical to the city and the region from an economic development perspective, area officials say. Moraine City Manager Michael Davis said the former paint shop is the last remaining structure that still remains vacant and, understanding the opportunity that the cavernous space offers, “it is vitally important to bring online as a productive facility.” “The facility presents additional opportunities to diversify Moraine’s economic base while also supporting regional manufacturing, advance materials and distribution needs,” he said. The project is owned and developed via a partnership between ICP and IRG. Both entities traditionally invest in assets like this one and between them have redeveloped millions of square feet of auto plants, Miller said. “We think we’re a good fit for this property and vice versa,” he said. Moraine continues to work with ICP and IRG on opportunities, Davis said. In terms of tenants, while ICP will work “with anyone who needs the building,” the best fit will be a manufacturer, Miller said. “For a manufacturer, this building represents an opportunity to get up and running quickly and for substantially less cost than new construction,” he said. With its second floor removed, it likely will be “the most competitive building of its size in the state,” especially when considering ceiling height and existing infrastructure, including power,” Davis said. In terms of overall capital investment since GM left in 2008, the property has garnered “well into the hundreds of millions in structural value and improvements,” he said. “Numbers when including all tenants and the machinery and equipment side likely exceed $800 million with the majority coming from Fuyao,” Davis said. “With that said, there have been investments by several other companies including Motoman , Star Cartage (and) US Aeroteam (no longer there) and on the former vacant properties – ODOT, Wright Mulch, R&J Trucking and Copart , to name a few.” More than 2,000 jobs have been created by all companies and investments, not including in/out contractors. All businesses are hiring, including “a substantial need” by Fuyao, which rents out 1.5 million square feet out of the site’s 2.3 million in square feet, Davis said. Angelia Erbaugh, president of the Dayton Region Manufacturers Association , said having move-in ready, industrial space is “certainly” a good thing. “Manufacturers continue to be busy and they are continuing to grow,” Erbaugh said. “They’re constantly looking for people when they’re busy and they often need to look at expansion and […]

After a miserable performance in 2022, semiconductor stocks are looking for a comeback in 2023.…

Do you remember when most product labels said “Made in the USA”? For many decades the…