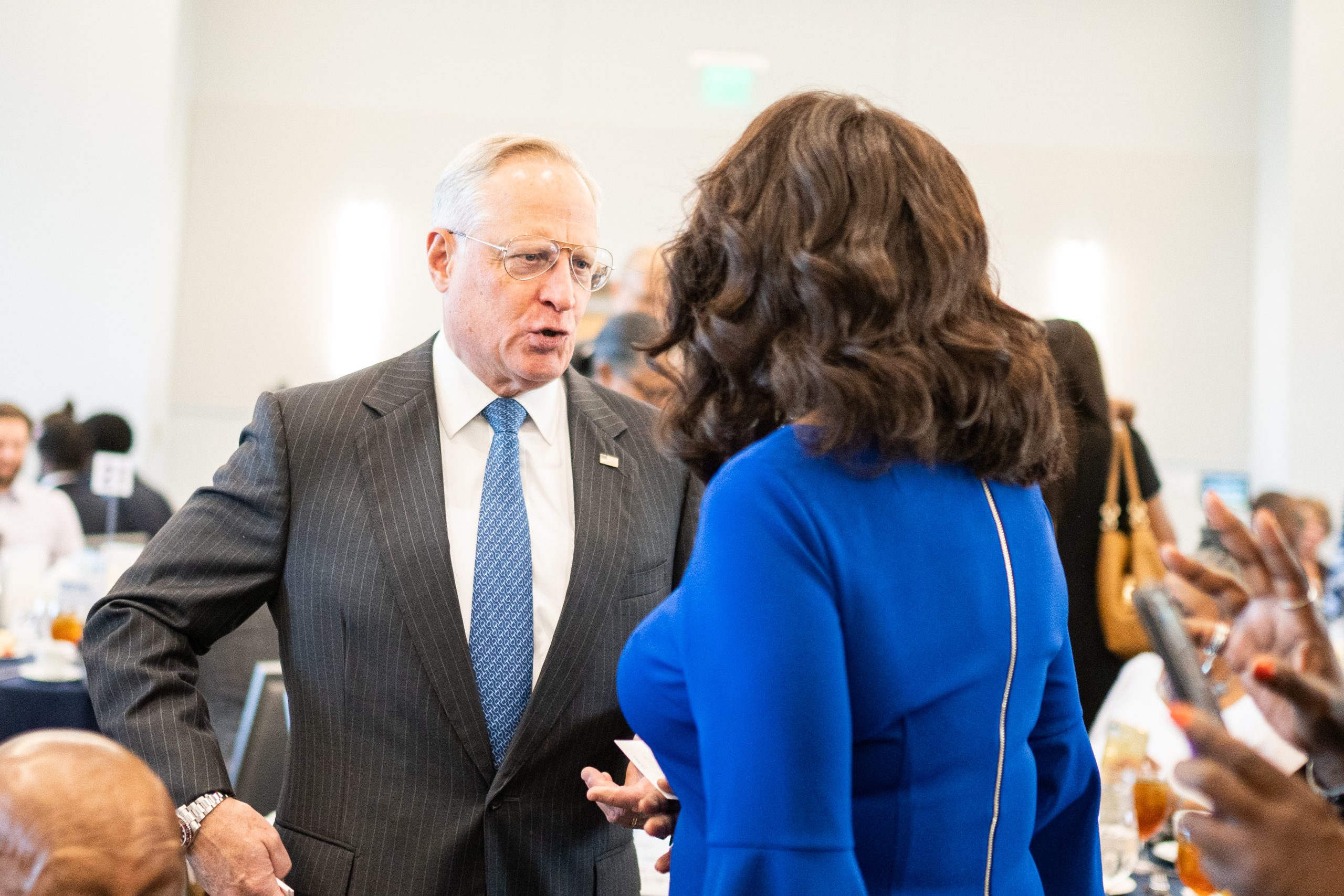 Ross Perot Jr. at the Southeast Fort Worth Inc. Annual Awards Luncheon on Sept. 16. (Photo by Cristian ArguetaSoto) “Don’t take this growth for granted.” That was the advice Ross Perot Jr. had for attendees at the Southeast Fort Worth Inc. annual awards luncheon on Sept. 16 at Texas Wesleyan University. Perot knows about growth as he explained in his discussion with NBC5 anchor and reporter Evan Anderson. Perot, chairman of The Perot Companies and Hillwood , discussed the beginnings of the AllianceTexas development, a 27,000-acre master-planned community in north Fort Worth. Perot singled out the reshoring trend and the development’s Mobility Innovation Zone as keys to future growth for Alliance and the area. Reshoring is the trend of returning more manufacturing, research and development to the U.S. from overseas. Perot noted that the recent opening of a Stanley Black & Decker factory and the MP Materials magnet plant that is under construction in Alliance are both bellwethers for the reshoring trend, but that he expects more. Alliance and the Dallas-Fort Worth area are perfectly positioned to take advantage of that trend, he said. “That’s what we position ourselves to do,” he said. “And we’ve done it in the case of the two companies I mentioned, MP Materials and Stanley Black & Decker. But we will see more.” Stanley Black & Decker in 2020 opened a 425,000-square-foot manufacturing plant that employs about 500. Those products were previously manufactured in China, Perot said. MP Materials Corp. is building a 200,000-square-foot, $700 million plan to manufacture magnets used in electric motors.The company will likely build more plants as demand for the materials is expected to increase, he said. Perot said the reshoring trend was underway before the pandemic, but the COVID crisis illustrated the vulnerability of the U.S. and other countries that heavily relied on China for goods, such as face masks and gloves. But those factors are even more important as countries try to implement more renewable energy solutions. “You’re never going to have a renewable boom if you keep going to China for all your solar panels and wind and rare earth minerals and batteries,” he said. Those projects at Alliance are the result of far-sighted policies implemented by previous Fort Worth City Councils who bought into the vision of a large master development with an airport and other transportation advantages, he said. At the time, in the mid-’80s, at the end of the Cold War, defense-industry dependent Tarrant County faced significant job losses, Perot said. At the same time, the Texas real estate market had bottomed out. Perot’s Hillwood group began buying land in north Fort Worth relatively cheaply. “Companies can come to us, and they can do business quickly and easily,” he said. While the AllianceTexas development, which reported more than $8.66 billion in economic impact in 2021, is the company’s largest project, it has others in the area as well. Although nothing has been announced, Perot is looking at southeast Fort Worth to determine how the company can participate in economic development there. While Alliance is a “greenfield” development, Perot’s companies also do redevelopment for areas similar to southeast Fort Worth where there are existing structures and a variety of owners, he said. He pointed to the company’s Victory Park development around the American Airlines Center in Dallas, which took more time but eventury bore fruit. “That was all brownfield redevelopment,” he said. “We’ve gone into the inner city and we’ve taken on really big cleanup projects to transition to the next generation of development.” Perot said they are looking for the right opportunity and the right idea for southeast Fort Worth. The Dallas-Fort Worth area has more room to grow than the cities currently ahead of it in size. New York and Los Angeles are locked as to how much more they can grow, he said. “Dallas-Fort Worth can grow 360 degrees,” he said.”There’s plenty of room to grow.” Southeast Fort Worth Inc. provides economic growth and job creation in that portion of the city. At the event, the organization honored Opal Lee , often known as the “grandmother of Juneteenth,” with their Person of the Year award. Bob Francis is business editor for the Fort Worth Report. Contact him at bob.francis@fortworthreport.org. At the Fort Worth Report, news decisions are made independently of our board members and financial supporters. Read more about our editorial independence policy here . Want more coverage of our growing city? We depend on our members to fund our Fort Worth […]

Significance Economic production is organized in supply chain networks. The resilience of supply chains is,…

What’s next for the supply chain? Potential reshoring

The novel coronavirus pandemic, along with the various shutdowns and slowdowns it caused, taught a…