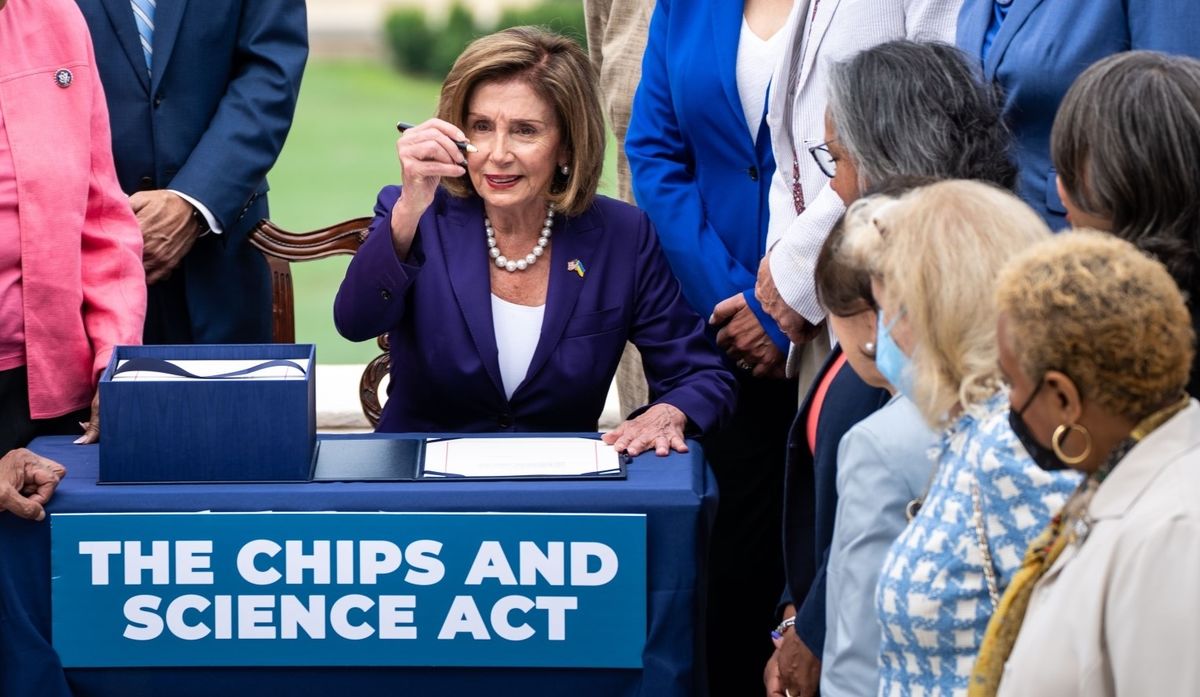 After 18 months and innumerable permutations, the Chips and Science Act has finally landed with a $280 billion thud on President Joe Biden’s desk. It’s fair to call it a mixed bag. Some aspects of the bill should be uncontroversial. Its proposal to boost funding for the National Science Foundation by $81 billion is overdue, for instance, as is a reorganization of the agency to focus more on technology. Both provisions should help lay the groundwork for growth and innovation. Yet the bill also devotes an astonishing amount — some $52 billion — to propping up the domestic chipmaking industry. The rationale for this splurge is twofold. One concern is that the US is no longer as competitive in this field as it once was. Although America still leads the world in chip design, the global share of semiconductors produced domestically has declined from 37% in 1990 to 12% today. Analysts estimate that only about 6% of new capacity will be built in the U.S. over the next few years, compared to some 40% in China. Another worry is national security. The US military alone requires about 1.9 billion chips a year for weapons, communications and so on. The sheer variety of essential products and services that now rely on semiconductors — from mobile phones to laptops to medical technologies to automobiles — is enough to give pause about relying so heavily on overseas partners, particularly given the risks of future conflict with China. As it stands, however, this vast new splurge is unlikely to be cost-effective. To make the most of it, Congress needs to act on two fronts. First, the US simply does not have the workforce to sustain this new capacity. About 40% of high‐​skilled semiconductor workers in the US were born abroad . Since 1990, the number of foreign-born students in relevant graduate programs has nearly tripled. Yet current immigration policy makes it exceedingly difficult to retain this talent, while the US education system isn’t producing enough domestic graduates with appropriate skills. Chipmakers are already straining as a result. A foundry being built in Arizona by the Taiwan Semiconductor Manufacturing Company is months behind schedule , while the company is struggles to find enough engineers and skilled technicians to staff it. For the US to become self-sufficient in chip production, one report found , it would need to add some 300,000 additional fabrication jobs. Even a more modest reshoring would necessitate thousands of added high-skilled foreign-born workers. Prudent immigration reform is the only answer to this quandary. In particular, Congress should increase visas for skilled workers and prioritize applicants with in-demand STEM skills, while exempting international graduates of U.S. schools with advanced science degrees from the cap on green-card allotments. Chips aside, such changes should be a no-brainer: They would help boost productivity, build tomorrow’s workforce, and capitalize on America’s ability to lure the world’s most talented immigrants. A second challenge is that so much money will be difficult for the chip industry — already awash in record profits — to productively absorb. There’s a reason that protectionist measures of this kind generally don’t work. By shielding companies from the salutary effects of market competition, they induce complacency, inhibit productivity, and dampen the incentive to innovate. It’s all too easy to imagine bloated, wasteful, government-dependent chipmakers demanding yet more handouts a decade down the line. Congress can head off this threat with some pro-competitive reforms , including expanding relevant free-trade deals; relaxing export controls, which often serve to impede competition; and scrapping needless tariffs. Beyond that, lawmakers must be mindful about how all this new cash is being spent — and ensure that a one-time splurge doesn’t turn into a permanent subsidy. Semiconductors play a crucial role in the US economy. An added degree of self-sufficiency is surely in the national interest. But Congress should remember what it often forgets: There’s more to smart policy than writing big checks. To contact the senior editor responsible for Bloomberg Opinion’s editorials: Timothy L. O’Brien at tlobrien@bloomberg.net

Made in the USA – Episode 2: The Automation Puzzle

There is a fundamental question we need to answer when we talk about automation: To what extent…

Wisconsin has enjoyed a rebound in manufacturing jobs, and business owners and advocates hope policies…