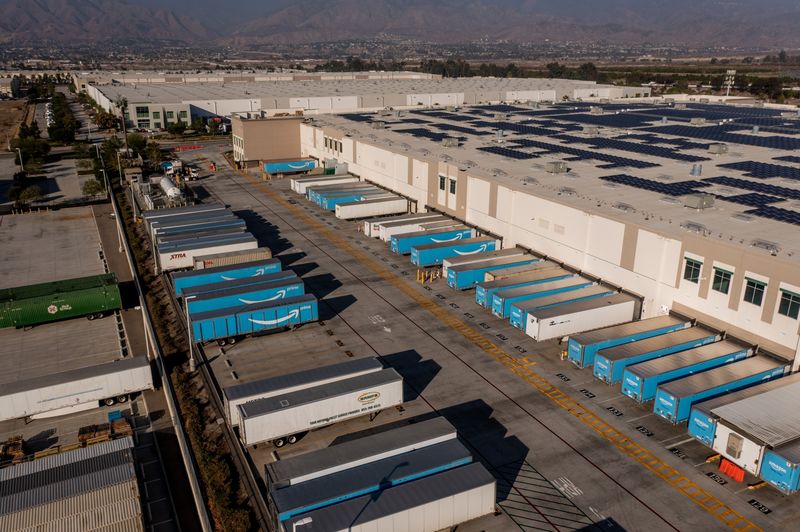 Amazon shipping containers outside a warehouse in Redlands, California, U.S., on Sunday, Nov. 7, 2021. Fallout from the global supply-chain crisis is clogging U.S. ports, pushing warehouses to capacity and forcing logistics managers to scramble for space. To understand where supply chains are headed next as they start to untangle this year, consider the mid-career education that United Parcel Service dispatched Bill Seward to receive in recent months. The new president of supply-chain solutions at the Atlanta-based courier giant spent 50 hours in “digital immersion” with top experts at Emory University. That’s because, as the pandemic demonstrated on a global scale, logistics is lagging other industries in the arena of digital commerce. So companies big and small are racing to ensure executives like Seward stay ahead of the transformation. “I’ve already met with customers who are on our pilots of some of the tech and heard from them about what they’re getting from it, and how excited they are about it, and their willingness to pay for it,” he said. “It’s game-changing because it enables them, but also it’s lucrative for UPS as we can provide such value that they’ll pay for this.” Such advances are fueling an influx of investment in logistics tech startups around the world, at rate of $100 million a day and more than doubling since 2020 the number of unicorns — those valued at $1 billion or more, according to figures compiled by CB Insights. ( Read the full story here .) For a company like UPS, it’s about providing a service that goes beyond offering just supply-chain visibility. “I’ve been really, really impressed by what I’ve seen the last couple of weeks about the investments we’ve made in some of the systems and networks — real-time dashboards that aren’t just giving you the score of the game and what’s happening in your network, but also making recommendations and the ability to discern from the data where you might want to pull a lever next,” Seward said. As former Amazon.com executive turned Flexport Co-CEO Dave Clark told Bloomberg in an interview, “we’re early innings still, or maybe the late innings of the first phase, which is people starting to get their data digitized and have visualization of their data.” “Today we’re getting data in a better condition to humans who are doing analysis on it,” Clark said. “Where we need to be is automating much of the decision-making along the way so that people can focus on how to add other incremental value to the process.” Such shifts will have longer-term economics benefits in the form of disinflation. HSBC economist James Pomeroy sees the combination of tight labor markets and better technology as accelerating automation in logistics and offsetting the higher costs that might come with reshoring supply chains. “If you’re a business, the tech has gotten better, the cost of employing someone to do it costs more — the trigger to do this stuff becomes clearer and clearer,” he said. “So we expect to see a much more automation within the manufacturing process, within trade processes, within that whole journey of a product being product to being on the store shelf.” Charted Territory Pick up | US auto sales likely rose in December and will rebound in the new year as a recovery in vehicle production will more than offset the effects of inflation and rising interest rates. Two years of semiconductor shortages and supply problems have kept vehicle production low and inventories lean. With factories picking up pace again, consumers will buy more vehicles this year even if automakers have to help them manage rising interest rates by cutting today’s lofty prices. Carmakers likely sold new cars at an annual pace of 13.3 million in December, up 7.3% from a year earlier, according to the average forecast of six market researchers. Most automakers will report their latest quarterly and annual US new car sales on Jan. 4. Today’s Must Reads Higher cost | Tesla is set to pay more for the lithium that powers its electric vehicles after a supplier amended their deal amid a relentless price rally of the metal. Meanwhile, the company’s shares plunged after it said it delivered fewer vehicles than expected last quarter. Sound alarm | In three decades at Samsung Electronics, Yang Hyang-ja helped shape the 84-year-old conglomerate’s present dominance in global memory chipmaking. Now, she’s taking on a far broader challenge: ensuring Korea remains relevant as the US and China fight over semiconductors. Bigger breaks | […]

Valley agencies up for $312,000 federal investment in ‘Internet of Things’

After 18 months and innumerable permutations, the Chips and Science Act has finally landed with…

BDO: 22% of companies plan to reshore to US

While optimism is returning to the economy, 83% of U.S.-based chief financial officers (CFOs) expect…