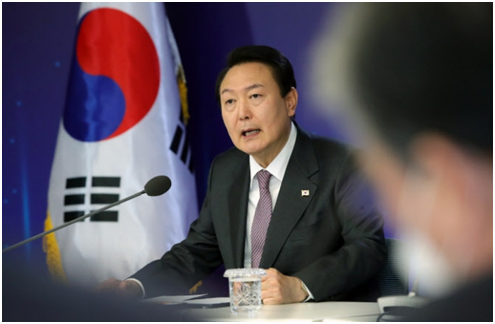 South Korean President Yoon Suk-yeol The Ministry of Trade, Industry and Energy released a supply chain diversification strategy at its meeting on Nov. 23, which was hosted by President Yoon Suk-yeol. The strategy is to reduce supply chain risks by relying less on China. The government is planning to assist in relocation of South Korean companies currently doing business in China while increasing its reshoring assistance. The strategy also includes closer cooperation with the ASEAN and Latin America. In the ASEAN region, South Korea will expand its supply chain cooperation with Indonesia and Thailand in particular as well as Vietnam. In Latin America, it is going to work more closely with Chile, Argentina, Brazil, Mexico, and so on regarding natural resources procurement. The number of FTAs between South Korea and Latin America is expected to increase at the same time. South Korea’s high supply chain reliance on China has caused multiple problems. Two years ago, wiring harness supply from factories in China suddenly dropped to seriously affect automakers in South Korea. Last year, China’s urea solution export ban affected diesel car drivers in South Korea. South Korea’s move is in step with those of the United States and the European Union. The United States implemented the Inflation Reduction Act this year in an attempt to limit the use of Chinese EV materials and components, which is an example of its anti-China trade policy changes. In the European Union, the European Critical Raw Materials Act is in the making for the same purpose. The government explained that its assistance for South Korean companies newly entering the Chinese market would be increased separately from the strategy. “The strategy does not mean an evacuation from China and, rather, export assistance for green business, healthcare, medical appliances, and so on will be increased in step with China’s latest market trends and carbon neutrality policies,” it said.

In the past several decades, there has been a growing amount of manufacturing and supply…

Job Announcements per Year, Reshoring + FDI, 2010 thru 2022-projected In the Reshoring Initiative 1H…