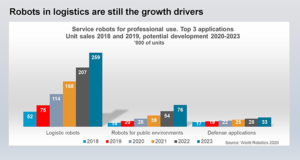 Are we there yet? Many of us look forward to putting 2020 in the rearview mirror. We long for a world post-pandemic.

It’s been a challenging year for all industries, even those that experienced a boon during these precarious times. Yet just by its visionary nature alone, the robotics and automation industry is an optimistic one. Innovations on the scale seen in just the last decade don’t come from apathy and complacency. The industry is fueled by dreamers and doers, and tempered by pragmatists. Together, their potential is limitless.

Executives from some of the industry’s leading suppliers are optimistic. The CEOs and presidents of ATI Industrial Automation, FANUC America, Harmonic Drive, KUKA Robotics, and SCHUNK weighed in during the Executive Roundtable at Robotics Week 2020. Video recordings from 4 days of educational sessions and keynotes are still available.

The executive panel sees opportunities in medical and pharmaceutical applications, agriculture, and an already booming e-commerce sector that will continue to thrive post-COVID. As a result, the service robots sector is expected to grow at much higher rates than industrial robots. Logistics robots are driving the upward trend with sales projected to reach 259,000 units by 2023, according to an International Federation of Robotics (IFR) report.

One exec reports rising interest from companies outside the automotive space that are looking to launch massive automation ramp-ups with multi-robot fleets across multiple global locations. Experienced systems integrators will be in demand to help these companies quickly scale.

In contrast, the growing number of smaller manufacturers now looking to adopt robotics for the first time will need robots that are easy to set up, program and deploy. Collaborative robots will play a major role in satisfying this demand and cobots are projected to occupy up to 29 percent of the total market for industrial robots within the next decade. Entire ecosystems are developing around cobots to provide plug-and-play peripherals – grippers, sensors and software – for a turnkey solution to rapid, cost-effective deployment in a variety of applications. Ease of use, scalability and flexibility will be in greater demand going forward.

Reshoring was a hot topic among these thought leaders. It’s been a source of fodder for several years as labor costs rise in traditionally low-wage regions, trade tensions mount, and robotics and automation costs continue to decline.

Supply chain disruptions that rippled across the globe due to the pandemic have stoked the reshoring debate. Financial and investment analysts say they are struck by the overwhelming interest in automation and expect it to help offset the costs of reshoring efforts. A Bank of America Global Research report foresees new high-tech, higher-paying jobs, increased innovation, and a positive ripple effect on local economies as these Tectonic Shifts in Global Supply Chains play out over the next decade.

In highly competitive, high-paced markets, automation becomes the great equalizer, at home and abroad. Turbocharged by the pandemic, investments in digitalization (employing digital technologies and information to transform business operations for greater productivity and efficiency) are expected to soar. Packed with the right enabling technologies, robots can sense, track and trace anything they encounter and communicate with other automation, providing a bounty of actionable insights.

Whether or not the stock market serves as a barometer for the industry, it’s interesting to dive in, if only for the opportunity to tap the minds of researchers in this space. ROBO Global is an index, advisory and research company based in Dallas, Texas. The list of members on their strategic advisory board reads like a Who’s Who of robotics, automation and AI. The ROBO Global® Robotics and Automation Index ETF (ROBO), first launched in 2013, invests in global companies that drive transformative innovations in these industry sectors.

“We came to the robotics revolution with the view that this would be the best investment opportunity in a generation,” says Jeremie Capron, Director of Research at ROBO Global. “The reason being that we’re looking at robotics and machine intelligence, or the AI side, as a set of general-purpose technologies that can be applied to every market, every industry.”

He likens robotics to prior technology revolutions such as the rise of the internet over the past 20 years. The internet became a tool that every business in every industry can use in their operations. The same is expected of robotics.

Living up to expectations, the ROBO index has consistently outpaced global equities since its inception. Even amid the pandemic, the ETF is up 38 percent in 2020 (as of December 8).

“We’ve had a compounded average annual return of 19 percent per year for the past 5 years,” says Capron. “That is nearly double the returns of global equities. The pandemic accelerated a lot of automation and digitalization projects and that’s been very supportive of performance.”

ROBO Global also launched a more pure-play AI index ETF in 2018 (THNQ), which is up 62 percent in 2020. It not only targets AI technology companies powering robotics and automation, but also sectors outside of our typical scope such as business process automation software used in human resources and IT departments.

“One of the most exciting areas for us in the last few years has been the machine intelligence side and the providers of that intelligence,” says Capron. “At the chip level, companies like NVIDIA and their graphics processing unit have become the defacto standard for training AI in the cloud, and increasingly at the edge. This has revolutionized the possibilities for automating on the factory floor and elsewhere.”

What’s driving this tremendous growth? “The enabling technologies, from the sensing, the computer processing, the machine intelligence, even the actuation, how the systems interact with the physical world, these technologies are converging right now and they have reached the levels of performance capabilities relative to cost that make all sorts of new automation applications possible,” says Capron. “That’s the overall structural force that’s driving the robotics automation market.”

Image: Norwegian Crystals Norway, once a leading country for polysilicon production, could soon host a…

Podcast | Strategies for Bringing Manufacturing Back to the U.S.

Easier said than done: That pretty well describes the task of shifting manufacturing out of…