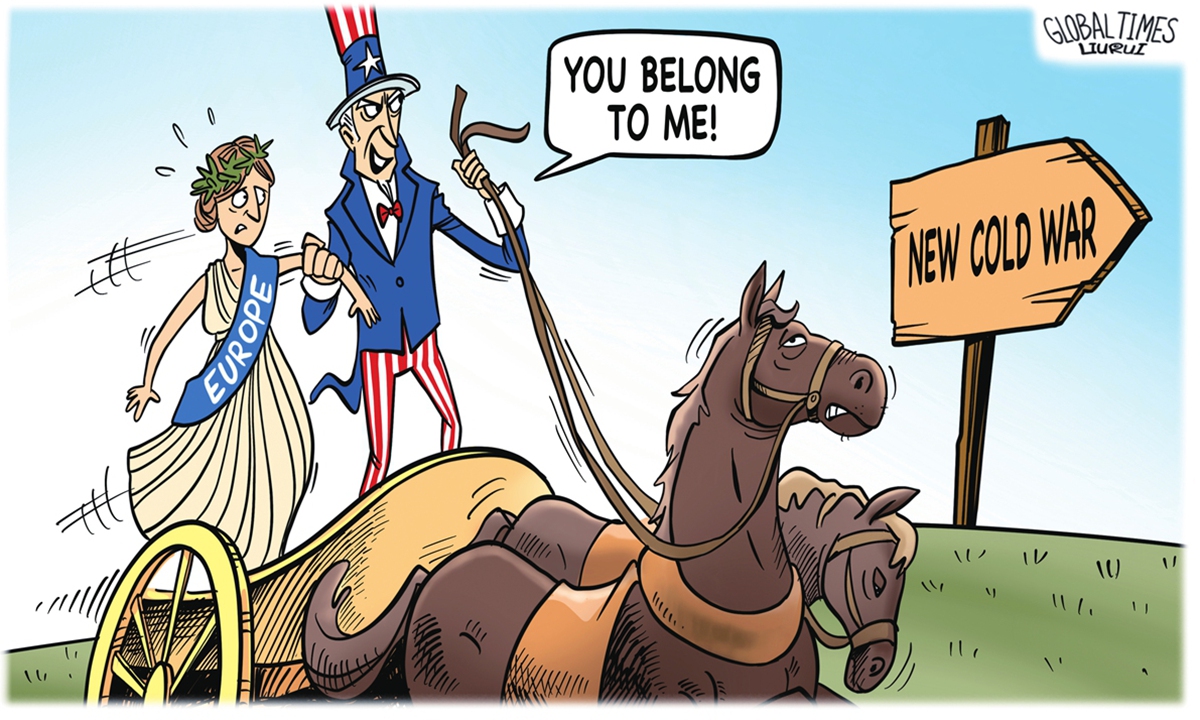 Illustration: Liu Rui/GT It has been a principal objective of the US to co-opt the European Union into its push to contain the rise of China. Across the board, Washington’s effort has been relentless, including lobbying against Chinese technologies such as Huawei, inciting confrontation over China’s internal affairs through issues such as Taiwan island and Xinjiang region, and framing a new geopolitical environment of ideological confrontation akin to the Cold War. The conflict in Ukraine has allowed the US to reassert its military and strategic clout over Europe following decades of stagnation, intensifying its reliance on American defence and provoking a renewed sense of urgency over geopolitical competitors and the so-called threats to democracy. The EU has not been able to formulate a coherent response to this pressure, largely due to conflicting priorities in its multi-faceted relationship with China. While countries such as Germany and France have sought to resist US pressure and continue engagement, some countries in Eastern Europe such as Lithuania have actively pursued antagonism of China in favor of the US. Likewise, some EU institutional leaders such as Ursula von der Leyen have also been vocally pro-American and branded China as a “systemic rival” to the European Union. However, recently, signs of resistance to the US in Europe have increased, and the pushback against a US-led world “decoupling” has become more notable. EU Foreign Policy Chief Josep Borrell was recently quoted as rejecting the premise of following US technology sanctions against China, but nonetheless continuing to brand China as a rival. He stated, “Certainly, the United States are [sic] our most important ally, but, in some cases, we will not be in the same position or on the same approach towards China,” Borrell added that the US’ “drastic reduction of China’s access” to technology is a “decision that has to be taken into account.” In the name of competition against China, the US is actively tearing up the global technological supply chain and building a new one consolidated around itself. This includes a growing embargo of high-end technology exports to China, but in addition to an injection of billions into forcibly reshoring semiconductor production. This is provoking global uncertainties, and Europe stands to be a significant loser, as it has been with the sanctions against Russia in respect to Ukraine, of these policies. In demanding Europe declare allegiance to American goals, Washington frequently requires Europe to undertake costs which undermine its own continental interests. In the US-launched technology war against China, European companies pose to suffer because American semiconductor sanctions are increasingly applied with an extraterritorial jurisdiction which prohibits third parties from using US equipment in supplying to the targeted country, known as the “foreign direct product” rule. The most striking example of this is the Netherlands-based lithography producer ASML, which sells chipmaking machines. China is one of its most important markets, with local companies such as SMIC purchasing the machines to advance their semiconductor production. However, the US has increasingly sought to curb the export of advanced lithography machines to China and has infringed on the company, having blocked it from exporting an “extreme ultra-violet lithography machine” to China in 2018, but Washington intends to go further, and the company has publicly condemned the move. On seeing the growing coercion against it, Europe has moved to exert greater resistance against the US, especially in light of the economic difficulties the Ukraine war has inflicted on the continent in terms of energy prices and inflation. European politicians have been vocal about the US which has been the primary benefactor of the situations it has inflicted upon Europe. Thus, beginning with German Chancellor Olaf Scholz’s trip to Beijing earlier this month, some EU leaders have pivoted toward engagement with China again, a development made more possible with the midterms passing in the US and the conclusion of the 20th National Congress of the Communist Party of China. While it is true the EU will continue to share a close ideological and cultural affinity with the US, significant differences remain at play on how to approach China. The EU must ultimately strengthen its own sense of strategic autonomy and geopolitical clout in securing an independent relationship with China, for if not, the US will continue to unilaterally trample on the EU’s interests in the pursuit of its own goals. The EU may work with the US, but the US ought not to own Europe as it rolls back globalization and burns bridges in the view of pushing ideological […]

Click here to view original web page at In pushing back against US, EU should not let US trample on its interests

The ruse of manufacturing demand will push up already fast-rising rents, and cut supply of…

These Stock Picks Will Benefit From More U.S. Jobs, Investments

Companies have more incentives to bring jobs back to the U.S., leading to a rise…

Hillwood’s Mike Berry: ‘North Texas Has a Lot Working in Our Favor.’

COVID-19 accelerated many trends in commercial real estate, especially in e-commerce and the industrial sector.…