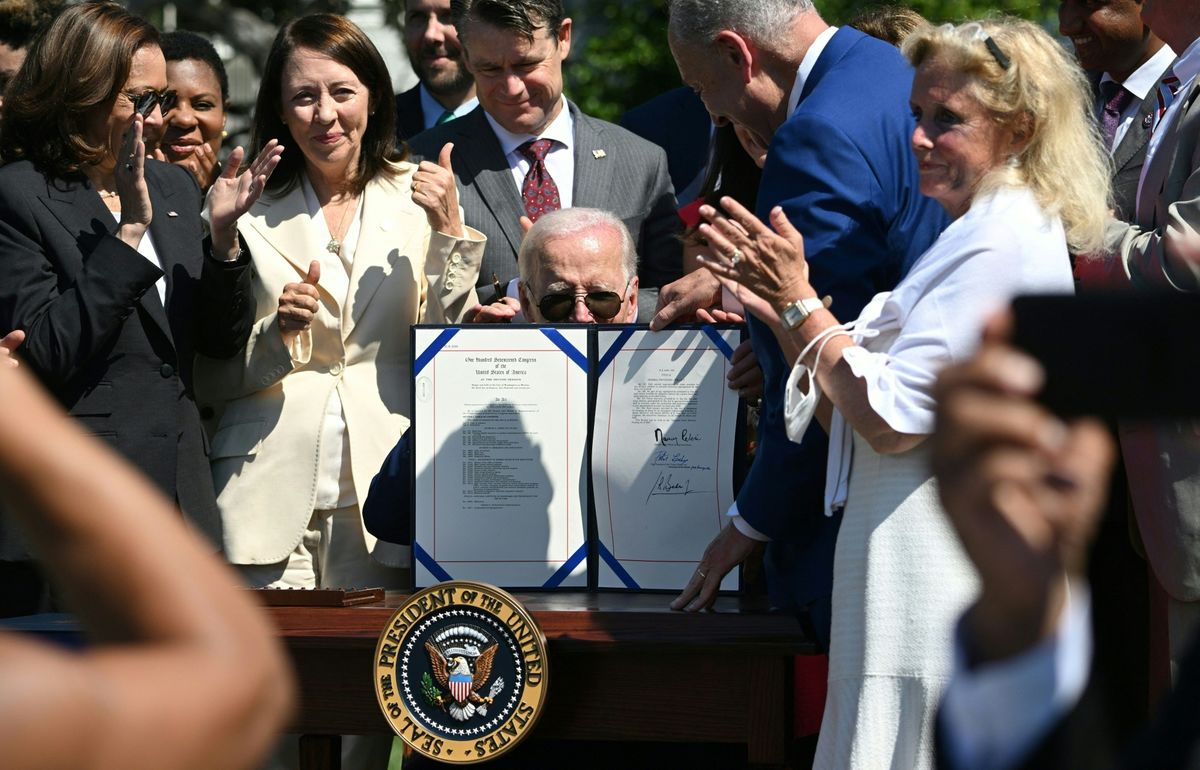 The pandemic, supply chain snarls, government action and automation have lined up to give manufacturers the best opportunity ever to bring production home. The Chips and Science Act should help bring factories to the US. Photographer: Saul Loeb/AFP/Getty Images Thomas Black is a Bloomberg Opinion columnist covering logistics and manufacturing. Previously, he covered U.S. industrial and transportation companies and Mexico’s industry, economy and government. @tomwblack The Chips and Science Act that President Biden signed earlier this month is just the latest indication that the planets are aligning for a return of manufacturing to the US. Proponents have pushed for so-called reshoring for years, but it has never quite panned out. With the supply chain crisis still fresh in people’s memories, this time is different. If reshoring doesn’t become a significant trend over the next decade, it never will. To ensure this return of production isn’t haphazard and doesn’t leave gaping holes in the supply chain, there needs to be some coordination — and it doesn’t have to be by the government. “Resiliency” is the buzzword making the rounds at corporate boards. This is a direct reaction to supply chains that broke down during the pandemic and injected a nasty bout of inflation into worldwide economies. When examining the root causes of the breakdown, it should lead to the conclusion that industrial production — just like the food at a restaurant — is much better when it’s made locally for the local market. “Making your product closer to your customer is a very good thing in terms of removing some of the unknowns from your supply chain,” said Daniel Swan, co-leader of McKinsey & Co.’s operations practice. “I think this is going to be something very real.” The advantages of bringing back production goes beyond just diversifying the source of component parts and shortening supply chains, a key ingredient for making supply lines more resilient. There are significant benefits for the environment — every environmental group and proponent of ESG should be beating the drum loudly to encourage this trend of local production for local consumption — and even an argument for national security: computer chips and health-care equipment come to mind. In the 1980s, the globalism idea seemed to make sense: Build one huge factory where a gazillion widgets could be made at the lowest cost, which at the time usually meant China, and then ship them around the world. Empty industrial parks weren’t a problem, the thinking went, because the US could just import those cheap goods and pay for them with a combination of service-economy salaries and debt. And then there was this drumbeat: Everybody needs to send their children to college because the new-economy jobs will render blue-collar work obsolete. The tedious, repetitive, sometimes dirty work of factories would be done by other countries with lower skills and cheap labor. The number of manufacturing jobs reflects this school of thought. They peaked in 1979 at nearly 20 million and dropped to just north of 11 million in 2010 before stabilizing at just above 12 million. In 2000, the year before China entered the World Trade Organization, the US imported $100 billion of Chinese goods. That jumped fivefold to $500 billion last year, and the trade deficit with China surpassed $350 billion. It took a global virus to wake everybody up to the fact that the US doesn’t make enough products at home. And the big lesson learned from the pandemic and the scramble for supplies that ensued was that the weakest link in the chain is maritime shipping. These huge vessels are mostly controlled by a few large companies and, because it takes years to build a container ship, it’s impossible to ramp up capacity in the short term. That leaves price as the only market mechanism to manage a surge in volume, and that became a stark reality quickly. The cost to ship a 40-foot maritime container from China to the US West Coast jumped fivefold to more than $20,000 during the worst of the shipping crisis last fall, according to Freightos, an online shipping marketplace. Not to mention that the huge container ships that ply the oceans spew a trail of carbon and garbage in their wakes. Once the ships reached their destinations, the US ports and the supporting transportation systems weren’t nimble enough to handle a surge of imported goods. The delays caused companies to put in extra orders to ensure they received supplies and introduced the average person to an obscure logistics […]

Click here to view original web page at If Factories Don’t Return to US Now, They Never Will

Made in the USA: It’s not necessarily an all-or-nothing proposition