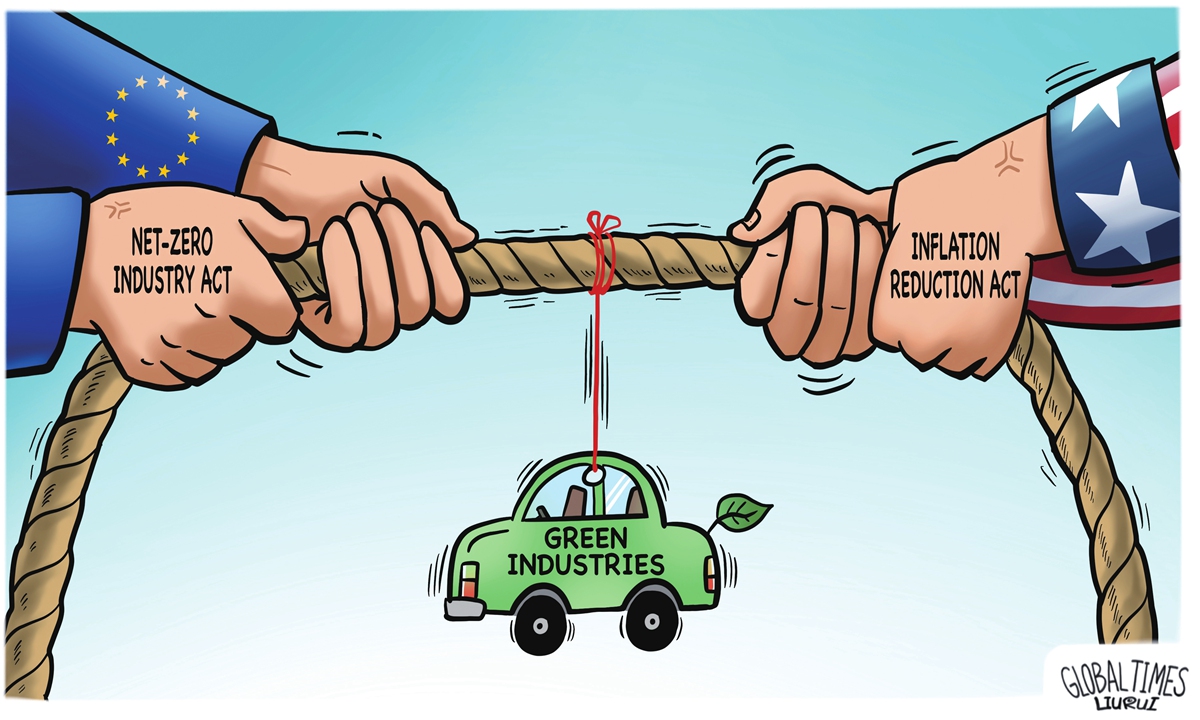 US Trade Representative Katherine Tai was quoted by media as saying recently that the US has placed the highest priority on addressing EU concerns that the US green subsidies law will probably lure clean tech businesses to the US at Europe’s expense. Tai, the Biden administration’s most senior trade official, rarely use words like “highest priority,” but, it is very likely that Tai’s remarks will turn out to be just political posturing trying to relieve European people’s anxiety by offering empty promises. US President Joe Biden signed the Inflation Reduction Act into law in August, 2022, a bill that provides $369 billion for climate and clean energy provisions, which aims at attracting manufacturing investment to the US and therefore “threatening European businesses and industry.” Some EU officials have expressed serious concerns about the bill, saying it breaches international trade rules. Although Tai noted the US has given the highest priority to address EU concerns, it is absolutely impossible for the US to repeal the Inflation Reduction Act. This has consolidated analysts’ view that trade tensions between the US and EU will continue for some time. Currently, US trade policy encourages reshoring – bringing manufacturing production back to the US from the rest of the world. The Biden administration, on the one hand, tries to reshore manufacturing jobs at Europe’s expense, and on the other hand, tries to woo Europe in an increasingly contentious US-China competition and convince European countries to decouple from the Chinese market. It should be pointed out that the US is unable to gain European support while harming the interests of European countries with its reshoring push. In Washington’s selfish calculations, it wants to sacrifice European interests in exchange for US’ strategic interests. It’s so calculative, but there are fewer people that will buy this. European Commission President Ursula von der Leyen said on Tuesday that the EU needs to work with China on clean tech and push for a level playing field rather than seek to decouple from the world’s second-largest economy, Reuters reported. “We will still need to work and trade with China, especially when it comes to this transition. So we need to focus on de-risking rather than decoupling,” she added. Although she has also urged China to further improve the investment environment, this does not affect the fact that China-EU economic and trade cooperation has been improving both in diversity and volume. In 2021, bilateral trade volume exceeded $800 billion for the first time while investments exceeded $270 billion in cumulative terms. Last year, Europe attracted several major Chinese investments. Chinese battery producer Contemporary Amperex Technology Limited has officially announced its decision to build its second European plant in Hungary, while Chinese automakers, including BYD, NIO and XPeng, are exploring market opportunities for electric vehicles in the continent, according to the Xinhua News Agency. While the US tries to bring manufacturing jobs back, Chinese enterprises are turning their eyes to the Europe. China and the Europe have kept expanding mutually beneficial cooperation in various fields, bringing tangible interests to the two peoples. Against the backdrop of the considerable increase in protectionist measures that could be observed during Washington’s reshoring and decoupling push, the global economy remains fragile, and further setbacks could affect everyone. Currently, we need cooperation, rather than decoupling. On this issue, China and Europe should have a lot in common. In fact, firm support for globalization and multilateralism has always been common ground between China and Europe. Of course, there are always misunderstandings in a relationship, but we believe China and Europe can properly manage differences and strengthen cooperation. In fact, clean tech may become a spotlight of the mutual cooperation between the two sides. Europe and China will likely both compete and cooperate with each other. However, we believe competition between the two sides will be benign and allow both to win their own shares of the international market.

Click here to view original web page at GT Voice: US unable to push ‘reshoring’ and ‘decoupling’ simultaneously with Europe

What’s needed to make it in America? Public-private partnerships that cultivate a highly skilled workforce

Getty Images It’s a common refrain we hear from every corner of our economy: too…