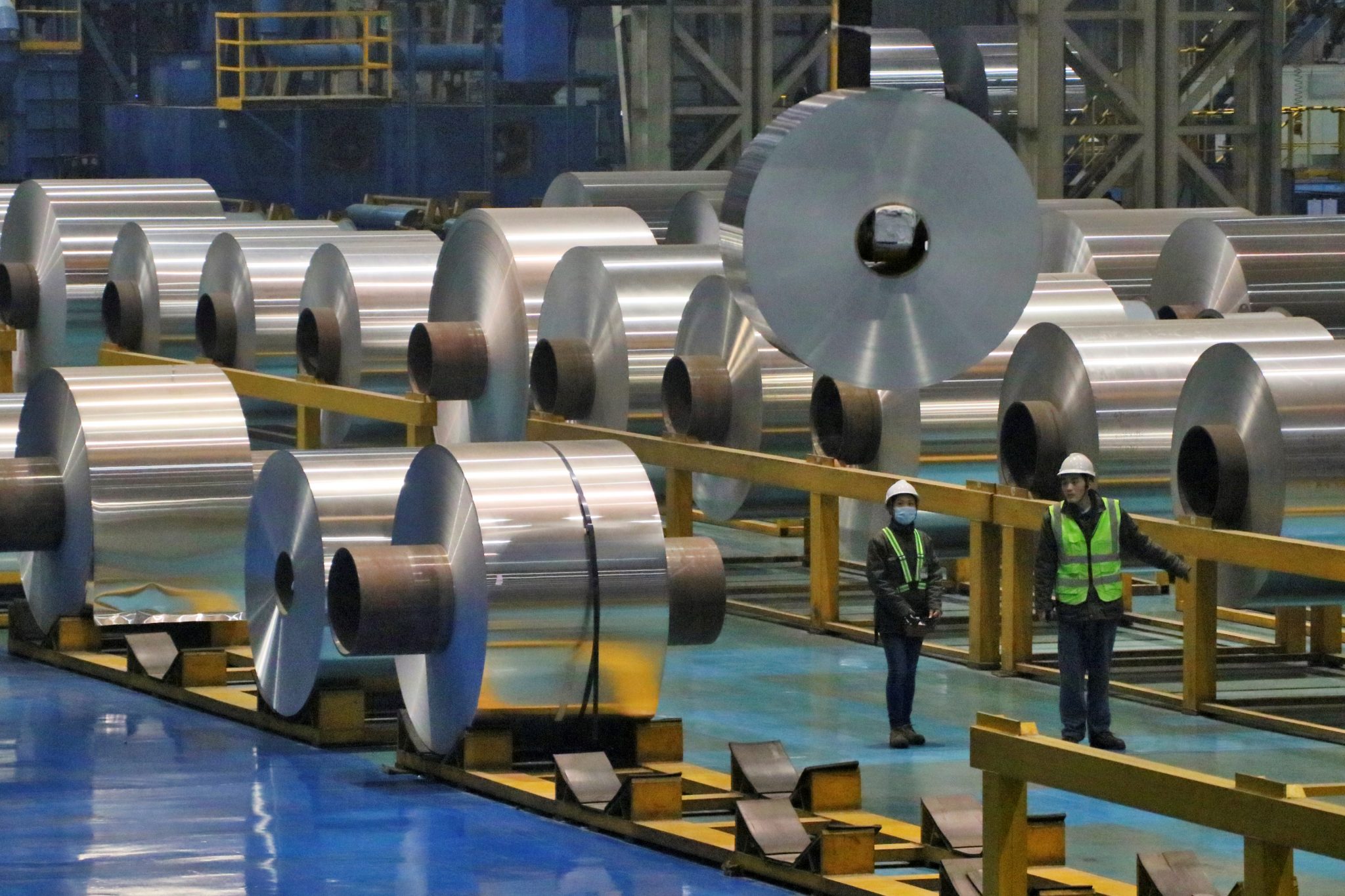 Authors: Samuel Hardwick and Adam Triggs In 2018, the United States put Russian aluminium giant Rusal on a blacklist to turn the screws on influential oligarchs. Because of Rusal’s centrality in global alumina, bauxite and aluminium networks, the global repercussions were immediate. Employees work at the production line of aluminium rolls at a factory in Zouping, Shandong province, China, 23 November 2019 (Photo: Reuters/Stringer). The sanctions hit operations as far away as Guinea and Jamaica. Irish ministers held talks with the European Commission in an effort to save jobs at a refinery in Limerick. European car manufacturers that relied on Rusal for hard-to-substitute aluminium parts ultimately lobbied successfully for the sanctions’ reversal within a year. With the invasion of Ukraine, the White House is again weighing up new Rusal sanctions and broader curbs on Russian aluminium. The Rusal saga provides some lessons for economic resilience and underscores the difficulties of so-called ‘onshoring’ and ‘friend-shoring’. Securitisation of trade is not going away quickly. Onshoring or friend-shoring policies are an established feature of US trade policy. But in an era of great power competition, restrictive trade policy won’t be enough for countries to achieve their economic or security objectives. The notion that onshoring, or producing domestically, makes supply chains robust is a fallacy. International supply and production networks allow firms to adjust to shocks in specific places. When COVID-19 first struck, Samsung could quickly redirect production from its factory in South Korea, where the outbreak was severe, to relatively less affected Vietnam. After the 2011 Tohoku earthquake, Japanese car manufacturers diversified their parts suppliers from domestic to international sources. ‘Onshore’ supply chains are rarely as onshore as they seem. Products that are made domestically usually have inputs from overseas. Internationally traded goods and services sometimes embody information, such as sensitive data or technical know-how, that governments have a security interest in protecting. These might include radar systems, encryption software or even a social media app. The objectives are to get the right level of security at the lowest cost and to understand the point at which those costs would no longer be worth bearing. When safeguarding sensitive research, investing in monitoring and enforcing contracts will often provide more bang for buck than visa restrictions, which deter talent. Unilateral restrictions like export controls will be self-defeating if the target can find substitutable products or information elsewhere. It’s not worth spending billions upgrading the gate if there is a huge gap in the fence. Taken at face value, friend-shoring, or cultivating trade with politically aligned countries, seems like an economically conscious alternative to onshoring. Deepening and broadening trade relationships, including through trade agreements and commercial diplomacy, is a broadly held economic and strategic priority. On critical technology, there is plenty of scope for cooperation among appropriate groups of countries to support innovation and lower trade costs. But if friend-shoring is just decoupling from China by another name, rather than smarter international cooperation, the economic fallout is likely to be vast and volatile. China’s global value chain-related output—the value of a country’s production that crosses at least two borders—is the highest in the world. China is also the world’s top exporter of intermediate inputs, particularly in the electronics sector. Another downside of friend-shoring is that it facilitates security–nationalist policies that undercut the strategic benefits of openness. Those benefits include export revenue for research and development investment, inflows of talented personnel and the ability to find synergies with foreign firms. The ‘friends’ in friend-shoring initiatives will have their own risks to weigh up. Not least of these are the global economic impacts of splitting supply networks into blocs, including higher prices. South Korea’s reported reluctance about Washington’s ‘Chip 4’ initiative highlights other concerns, such as asymmetric gains for foreign producers and higher levels of concentration in key industries. The world is bigger than China, the United States and the US-allied sphere. Non-aligned partners will want evidence that economic and security cooperation is mutually beneficial, inclusive and addresses geopolitical tension rather than exacerbating it. As Singaporean Prime Minister Lee Hsien Loong recently put it, reshoring and friend-shoring can ‘shut off avenues for regional growth and cooperation, deepen divisions between countries, and may precipitate the very conflicts that we all hope to avoid’. Multilateral trade provides insurance against domestic and bilateral risks. Before imposing sanctions in 2020, China accounted for 76 and 70 per cent of Australia’s barley and cotton exports, respectively. The sanctions sent those market shares close to zero, but in the months that followed, […]

Given China's strong and highly valued economic relations with a large part of the world,…

Preparing for the Business Bounce Back [Q&A]