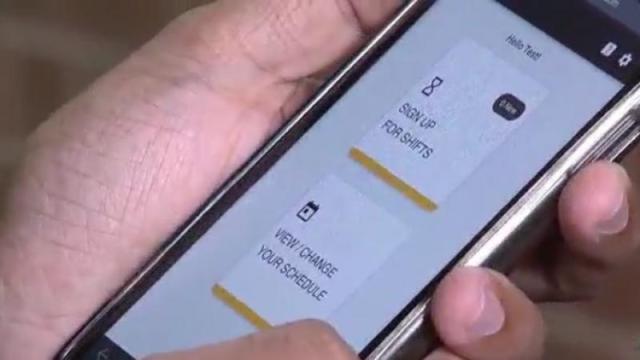 CUMBERLAND COUNTY, Pa. (WHTM) — With even the biggest Silicon Valley tech companies suddenly struggling to attract investment and laying off workers , this might seem like a terrible time for a far smaller tech company — based in central Pennsylvania, of all places — to try dazzling investors. But Mechanicsburg-based Gig and Take , which produces an app by the same name that matches factory workers with shifts of as little as four hours that meet their availability, managed to raise $1.5 million — and could have raised more but didn’t need it, its founder and CEO Rahil Siddiqui said Tuesday. With so many Goliaths struggling, why the investment-case success of this David? “The problem that we are trying to solve is significant,” Siddiqui said, pointing to ongoing global supply-chain issues. “So this country has now started paying attention to insourcing or reshoring or nearshoring its supply chain. That’s a lot of factories that are going to start showing up back on American soil. Where will we find all those workers?” Some of them, at least, using Gig and Take, Siddiqui hopes. The company raised the $1.5 million through what’s called a “pre-seed round,” led by Schematic Ventures and joined by Motivate Venture Capital and SHRM Labs , the venture-capital arm of the Society for Human Resource Management . Gig and Take raised earlier funds through Ben Franklin Technology Partners and Plug & Play Ventures . Advancing to this stage puts Gig and Take among a minority of startup companies that make it this far. Even so, only a minority of companies that attract pre-seed funding ultimately achieve long-term success. If central Pennsylvania seems an uncharacteristic place for a thus-far-successful tech startup, it’s a far more typical place for Gig and Take’s first customers, such as the century-old manufacturer Carlisle Construction Materials, or CCM. Most of CCM’s employees work traditional, full-time schedules. But among them is someone like Briann Shields, a single mother of three who works on the line manufacturing thermoplastic polyolefin, a roofing material. The shift she was working when we met her? “I got my kids ready for school, dropped my youngest off at the babysitter, and then I came to work from 11 to three,” Shields said. “So I have plenty of time to go pick both of my kids up and then go pick the baby up.” Not just any baby, but a girl born with brachial plexus: no function in her right arm. “In my condition and circumstances, it gives me the chance to go back to work,” Shields said. “Otherwise, I don’t know what I would have done.” Gig and Take “just gives people that can’t work a full time job the chance to make serious money on their own terms, on their own hours, and help the company,” she said. At first, her daughter’s condition meant three or four weekly therapy appointments. Now that’s down to more like one or two, and Shields is planning to ramp up to full-time hours at a job she says pays well but that she never could have taken if it were a traditional all-or-nothing, full-time-or-no-time proposition. Great news for Shields. But what about for her employer? “She has done a great job — really has learned the processes quickly,” said Susan Wallace, CCM’s vice-president of human resources. “So it’s great to be able to bring her on full time.” Wallace said like nearly all companies, CCM has struggled during the pandemic with staffing. So Gig and Take? “Whether it be parents of school-age children, students, even retirees who still want to work, it gave us that additional labor pool to look at,” she said. Siddiqui demonstrated Gig and Take. A worker like Shields selects from among available four-hour shifts; they can choose to work four, eight or 12 hours. “On the other end of this, as you can imagine,” Siddiqui said, “the supervisors are putting out the demand for the workers based on what type of skills they need and what date and time they need someone to help them out on the factory floor.” Factory jobs are safety-sensitive jobs that require varying training and skills, and Siddiqui said Gig and Take coordinates training and keeps track of workers’ qualifications.

On Capitol Hill, a 180-degree turn of events for climate, EV policy

Why Do Companies Reshore?

Reshoring is the opposite of offshoring. It applies to companies that are bringing production and…