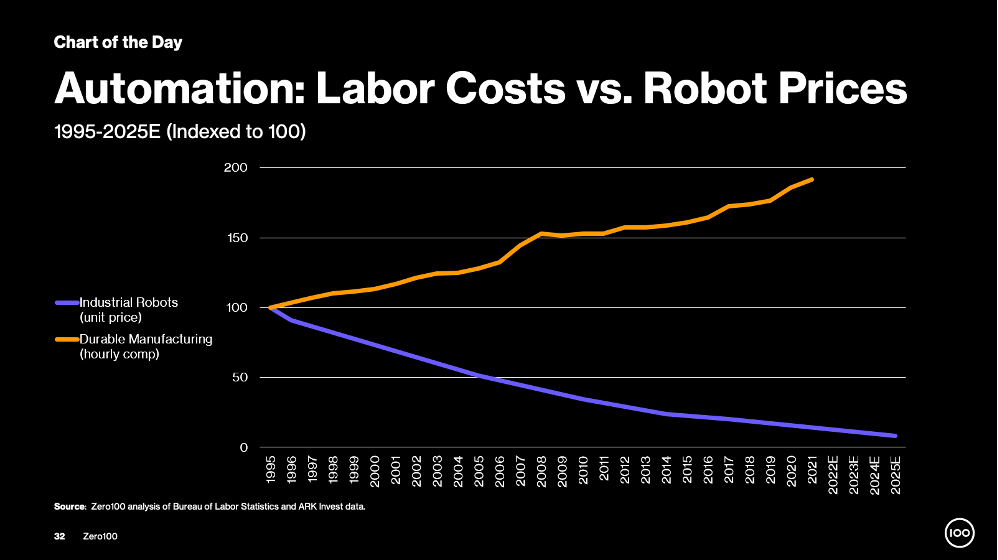 In 2008 after five straight years of virtually no growth in new installations, many observers saw little juice in manufacturing automation. But installations have surged since 2010 and manufacturers are now scrambling to define roadmaps for the future. This revival is less a matter technological innovation than a convergence of macro forces that are changing the economics of automation worldwide. Here are five megatrends making automation hot now: Demographics For the first time since 1960 China has a shrinking population . This should be no surprise. As countries develop economically, they tend to approach replacement fertility levels or lower. This is true for Japan, Korea, and most of Europe. World population growth is slowing and expected to plateau this century at around 10.4 billion. 10 billion potential customers over the coming decades means manufacturing needs to massively scale to keep up with growing demand. But, the stream of young workers flocking to cities like Shenzhen is slowing down. And even if India briefly steps into the gap left by an aging China, the same dynamic will play out as humans get richer and older. Automation is rising because low-cost labor is no longer the path to scaling manufacturing and business growth. Regionalization The rollback of globalization and rise of regional supply chains has begun. Trade as a percentage of global GDP peaked in 2008 at 61%. It has been falling in fits and starts since. The added pressure of trade wars , real wars , and a pandemic have made ‘ resilience’ a must-have supply chain trait for the 2020’s. Reshoring and nearshoring are hot because they promise shorter, less risky supply chains with less carbon-intensive shipping and handling, tighter lead times, and proximity to customers. Automation is the unlock that allows manufacturing to move closer to customers even if wages are higher and regulations more stringent. It replaces labor with capital and improves quality control and traceability with better data links across equipment and parts moving through fabrication and assembly. Better Value for Money The battle-royal shaping up between the US and China over semiconductors has the feel of a Cold War arms race. We should see big increases in capacity and technology innovation, which bodes well for the compute-intensive business of designing, deploying, and tuning automation in manufacturing. Government support for “strategic” technologies will subsidize the cost of engineering analyses and simulations needed to roll out new automation as well as breakthroughs in material science ( biosynthetics , carbon materials). Not to mention, the explosion in IoT and AI providing huge data sets and ever better learning techniques to refine and scale new manufacturing systems. Automation is getting cheaper as it gets better. signal 1.24 automation Expectations for Decent Work This is more than just the rise of smarter unions in the US. It is also the sense of disenchantment seen in “ Lying Flat ” movements among the young in east Asia and declining labor force participation post-COVID. Many social commentators see a permanent shift in how people feel about work. Some people want to grow, learn, and have an impact. For those, building a bridge from blue-collar to white-collar work is an opportunity to develop talent and accelerate automation. These “machine whisperers” will be pioneers in debugging the systems we roll out and they will respond to rising pay, recognition, and more challenge. Other people want a simple, reliable, respectful job so they can go home and be with family at the end of the day. Automation serves both kinds of people with higher labor productivity which sustains better pay and career paths. TikTok Supply Chains and the Fickle Consumers For all the technology we’ve poured into supply chains, it is nothing compared to the massive digitization of demand chains. iPhones, ecommerce, and social media are much larger digital forces in our lives than the robots and MES systems in our factories. TikTok has around 1.6 billion users spending on average 11 minutes per session watching 20-30 second videos from millions of influencers. It is currently the hottest trend in new media marketing, but it is unlikely to be last. This means that new products, new channels, and new user experiences are constantly in demand, and with ever shorter product lifecycles. Automation can be the key. Scaling production of a hit product while its hot is impossible if we have to hire workers to add capacity every time, but loading a new CAD file or formula into a smart machine isn’t. Automating manufacturing for agility […]

Out of Asia: Promise from Pandemic of a Manufacturing Renaissance in North America (Part 1)

Written by George Y. Gonzalez and Jesus Alcocer, Haynes and Boone The COVID-19 pandemic has exposed…

Manufacturing businesses are becoming increasingly predictive, adaptive and responsive as result of improvements made following…

Image: Norwegian Crystals Norway, once a leading country for polysilicon production, could soon host a…