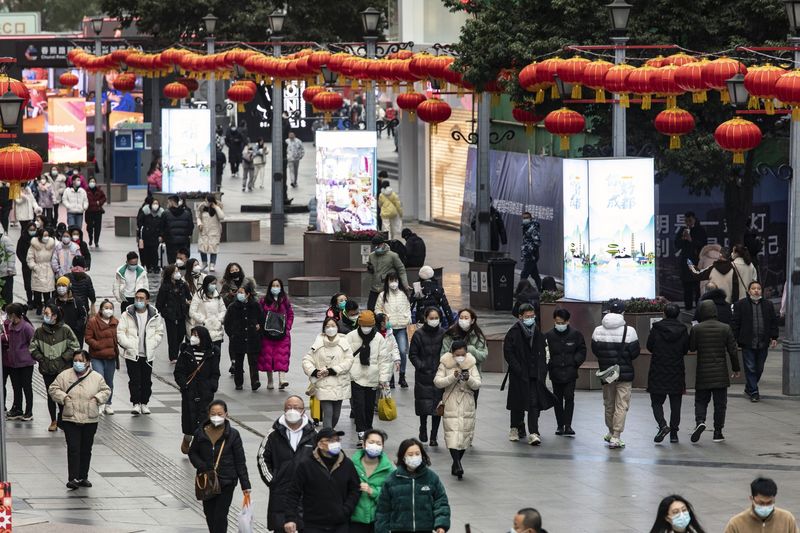 Pedestrians at the Chunxi Road shopping area in Chengdu in Sichuan province. The mantra “too big to fail” is often applied to banks and companies. But it applies to countries, too. The US and Europe are racing to reduce their reliance on China for everything from medical equipment to semiconductors. They are also increasingly punishing Beijing over human rights and for giving preferential treatment to local businesses, banning Chinese technology and rebuffing investment in their own companies and industries. Key reading : A lot of the whole reshoring/onshoring push is about short-circuiting China out of the global supply chain. While some companies — and some countries in Europe — are cautious about going too quickly, the trend is there. China’s economy had a rough ride in 2022, with the second slowest growth since the 1970s as President Xi Jinping stuck to strict Covid-19 curbs. It seems to be bouncing back now that Covid Zero has been lifted, even as tens of thousands die from the virus. But the pace of the rebound and its durability are unclear — either way, an increasingly volatile Chinese economy is bad for everyone. China’s population shrank last year as births have fallen again and deaths keep rising as nation ages It might score political points in the US to be choking off Chinese business as the 2024 presidential election draws closer, and it may play well elsewhere in a general climate of protectionism. But if the world’s second-biggest economy stumbles again, or becomes unpredictable over a protracted period, that will have negative effects elsewhere. Data also show China’s population started shrinking last year for the first time in six decades as births slow. It has been heading that way for a while, and labor supply is still decent, yet over time it will mean a smaller consumer market and potentially weaker demand. For all the talk of “decoupling,” trade between the US and China last year potentially hit an all-time high. Just as China needs the US, so the US needs China. And no one can afford a Chinese economy that turns further in on itself. Shipping containers at Tianjin port. Global Headlines Live Interview: German Chancellor Olaf Scholz speaks exclusively today with Bloomberg News Editor-in-Chief John Micklethwait about Russia’s war in Ukraine, ties with the US and China, plus Europe’s economic and energy challenges. You can watch the interview on Bloomberg TV at 10:45 am ET, or via a livestream on the Bloomberg website . Bolstering Ukraine | Polish President Andrzej Duda said at the World Economic Forum in Davos that pressure is growing on Berlin to give the green light to send German-made Leopard battle tanks to Ukraine. The death toll rose to 41 as rescue operations continued after Saturday’s missile strike by Russia against an apartment block in the city of Dnipro, the Ukrainian presidential office said. Russia will create new military commands near Europe as it expands its armed forces to 1.5 million people amid deepening tensions with the US and its allies. Organizers of the Australian Open banned Russian and Belarusian flags after a confrontation at a match on the first day of the tennis tournament. A world reshaped | Business and political leaders are converging on Davos for the WEF, which kicks off today . The elite are in the Swiss Alpine resort to chew over a world that’s being realigned by the shock of Russia’s war on Ukraine, increasingly intense US competition with China, and a breakdown in the system of globalization championed by the Davos crowd. More Indians blame NATO or the US combined for the war in Ukraine than blame Russia Indians view the US as the biggest military threat after China and place greater blame on NATO and Washington than on Vladimir Putin for his war in Ukraine, according to a new survey by Morning Consult, a US-based global business intelligence company. “Indians have strategic reasons to be wary of the world’s Western superpower,” according to Sonnet Frisbie and Scott Moskowitz, who oversaw the poll. Best of Bloomberg Opinion Hot seat | Chancellor Olaf Scholz proposed fellow Social Democrat Boris Pistorius, the interior minister of Lower Saxony state, as Germany’s next defense minister. Pistorius, 62, will be sworn in Thursday, and immediately be confronted with difficult decisions on arming Ukraine. He replaces Christine Lambrecht, who quit yesterday after a series of blunders. Explainers you can use Sunak’s retreat | UK Prime Minister Rishi Sunak is set to bow to demands of rebels in […]

Made in the USA – Episode 1: How We Got Here

Episode 1 of Made in the USA Podcast examines manufacturing issues related to trade policy, global…