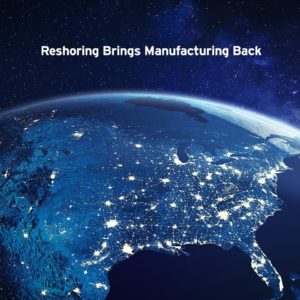 At Thomas, we’ve been tracking supply chain shifts since the Covid-19 pandemic began and our data shows that the increased interest in reshoring is actually accelerating.

The statistics are significant, too: In February, 54% wanted to bring production back to North America, but as of July 69% are actively looking to do so. That’s a 15% leap.

However, according to the July 2020 Thomas Manufacturing Index (TMX), which measures industrial activity based on first-party data from the tens of thousands of interactions that occur each day on Thomasnet.com®, there’s a critical gap in industrial production in North America despite the gains made by the stock market.

As Thomas Head of Data Dr. Hamid Benbrahim puts it, “We are noticing a new equilibrium whereby industrial production is resuming, but at a much lower level than pre-crisis.”

Manufacturers do feel confident in the future, though. 91% of the industry professionals who responded to our recent survey said they believe manufacturing in North America will recover from the Covid-19 pandemic.

Here are three trends we’re tracking that will help manufacturers speed up their reshoring efforts.

In an era in which we’ve seen Boeing build the largest warehouse in the world, it may come as a shock to learn that demand for smaller warehouses is actually higher than demand for larger-sized ones. If you follow real estate, you likely already know that rental rates for smaller units have increased two times that of units greater than 120,000 square feet.

At face value it might look worrying that warehouses are downsizing. After all, it would seem to suggest that companies are decreasing inventory.

There’s no cause for alarm here, though. What’s happening is that while downsizing the square footage of individual warehouses, companies are simultaneously increasing the number of warehouses they own and use.

With the new standard of same-day delivery established by Amazon Prime, e-commerce and brick-and-mortar retailers are discovering that local warehouses, even if they are smaller, are more efficient in meeting the needs of customers. Bottlenecks in the supply chain during the Covid-19 pandemic underscored this.

Walmart actually earned more than its competitor Amazon during the pandemic, in part  because it was able to use its 2,4000 stores as mini fulfillment centers. These thousands of stores are spread throughout the country, which means that online orders can generally be shipped closer to where the customer is than if Walmart was exclusively shipping from just a handful of large warehouses.

The closer the fulfillment center is to a customer, the faster it will reach the customer—thereby improving customer satisfaction.

For another interesting case study, look to clothing retailer Zara, which was founded in Spain and now operates stores in nearly a hundred countries. The fast-fashion retailer sets fashion trends by being able to change its offerings almost five times faster than its competitors.

The brand’s secret? It brings a significant portion of production in-house.

Zara’s investment in manufacturing clothing in-house reduces lead times, thereby maintaining the popular chain’s ability to be on the cutting edge of the fashion industry. Keep in mind too that we’re not just talking about the speed at which goods move from one part of the supply chain to the next—vertical integration improves controls and communication from the outset.

It’s worth noting that there is a drawback for smaller, in-house manufacturing companies that use Just-in-Time (JIT) production. To ensure fast turnarounds, materials will likely need to be sourced in bulk well in advance of the creation of new designs. Needless to say, if you’re producing customized or highly individualistic goods that require a wider variety of supplies, this may not be the best option for you.

However, a savvy business could still stay competitive by taking a hybrid approach.

With the Covid-19 pandemic forcing many businesses to temporarily close, work with fewer staff members, or require employees to work from home, we saw that the companies with the strongest technical capabilities had a strong advantage over their competitors.

Automation is not only about being able to continue to work during a crisis but about working smarter year round. As one of the individuals we surveyed said, “Robotic systems give us more productivity and zero rejects. Faster product assembly [means] an increase of finished products by 25%.”

As I’ve said before, manufacturers should continue to invest in technology right now. I believe now more than ever that this is the year that Industry 4.0 becomes more fully realized.

Despite the spike in unemployment due to the coronavirus, certain industries actually saw an uptick in their businesses. The manufacturing sector fared well in comparison to some other industries, as many manufacturing companies were deemed essential and as some pivoted their factories to create critical PPE.

We’re excited that more than a quarter of the companies we surveyed are actively hiring right now.

As much as we want to bring jobs back to the U.S., we have to face the stark reality that for a long time manufacturing has suffered from an image problem. As a consequence, with fewer people entering the sector, there is a significant skills gap.

Last year, a startling half a million jobs in manufacturing were left unfilled. If we don’t do something to reverse this now, $454 billion in production will be at risk by 2028, according to Deloitte.

I recently spoke with Mary Person, the director of Governmental Relations and External Affairs for FH Paschen, on the Thomas Industry Update Podcast, and she remarked that enduring stereotypes about construction and other industry jobs often deter women from pursuing those roles. Only 29% of the manufacturing industry is comprised of women, according to the 2016 census.

Person suggests mentorship as a way to recruit more women and close the skills gap, and I fully agree with her. Both formal and informal mentorships are a great way to build up the next generation.

I had a similar conversation about the stereotypes and misconceptions held about the industry with Ralf Weiser, vice president of operations at Alexanderwerk Inc., on the podcast a while back. He offered another practical solution: apprenticeships.

Apprenticeships are a win-win solution. Generally lasting between one and six years, these formal programs mix hands-on experience, classroom teaching, and mentorship. Apprentices get paid to be trained and mentored by those actively working in the industry, and companies get to mold apprentices into their dream workers.

More than half of the 26% of companies we surveyed that run apprenticeship programs continued to run them effectively through Covid-19. Perhaps more prescient, though, is the fact that the industries that have been running apprenticeships were not as affected by skilled labor shortages.

At a roundtable on trends in U.S. manufacturing at the White House recently, a participant asked if the thousands of jobs open in the manufacturing sector were blue-collar jobs or white-collar jobs. I explained that they’re neither – they’re new-collar jobs. I think the term accurately reflects the balance between traditional manufacturing skill sets and innovative, tech-driven education. It’s a new and exciting field driven by America’s great history of manufacturing as well as by today’s Industry 4.0 innovations.

The manufacturing field is ripe with opportunity. By investing in people, technology, and infrastructure and reimagining what American manufacturing could look like, we can accelerate reshoring and bring manufacturing back to the United States.

We need more domestic mining to fight climate change. On its surface, this may seem…

How the pandemic could globalize the economy even more

Harold James has been writing about globalization, and its oft-expected demise, for the better part…

In Trade’s 2020 Comeback, Globalization Is Alive and Kicking